Intel has called on the services of former “I’m a Mac” actor Justin Long in a series of new ads in which Apple’s latest custom-made M1 processors are cast as inferior to newer laptops powered by Intel processors. 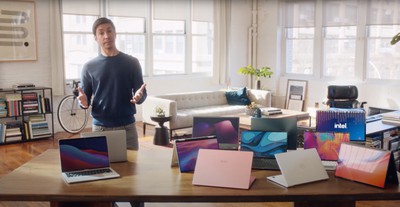 Well known for his role in Apple’s popular “Get a Mac” TV ad campaign from the 2000s, Long stars in a series of ads called “Justin Gets Real” on Intel’s
YouTube channel, beginning each video by introducing himself as “… a Justin – just a real person doing a real comparison between Mac and PC.”

In one ad, Long promotes the flexibility of Windows laptops, specifically the Lenovo Yoga 9i versus a MacBook Pro. In another video, Long meets a PC user gaming on the MSI Gaming Stealth 15M laptop, powered by a Intel Core i7. Long then asks for a Mac, before swiftly agreeing with the PC user that “no one games on a Mac.”

Other ads include Long throwing shade on Intel’s behalf towards Apple’s lack of touchscreen Macs, the inability to plug more than one external display into ‌M1‌ Macs, and the variety of different options available for laptops powered by Intel.

Intel undertook a similar marketing campaign in February with a series of tweets highlighting the “shortcomings” of Apple’s ‌M1‌ powered-Macs compared to Intel-powered computers. In November, Apple released its first Apple Silicon and is expected to fully transition its entire lineup away from Intel over the next couple of years.

This isn’t the first time Long has featured in ad campaigns for Apple rivals. In 2017, the actor starred in a series of Huawei commercials promoting the company’s Mate 9 smartphone.