Apple this morning released macOS Big Sur to the public, and since the software went live, it has had extremely long download times that have prevented many from being able to install it. 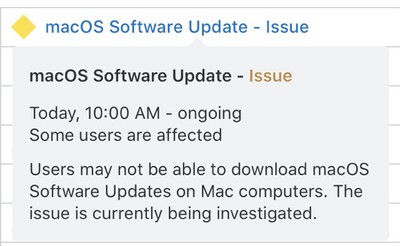 Even those who have made progress through the download have run into problems where the software downloading process is suddenly interrupted and must be restarted. Others have reported being able to download the update and then having the installation fail. Apple’s site appears to be having some major issues due to the number of people attempting to download the update at once.

In addition to these Big Sur download problems, Apple’s developer site is also down at this time, and as a result, some third-party apps are unable to be opened up at this time.

It’s not clear what’s causing the problem. It could be that the macOS Big Sur downloads are failing due to a developer site issue or the developer site could be failing under the strain of ‌macOS Big Sur‌ demand, but it is clear that those hoping to get the new software should hold off until things are more stable.

Apple’s System Status page is listing an issue with macOS Software Updates and says that the problem is “currently being investigated.”