It was the month we’d been waiting for, as the new iPhone 12 range was finally announced, and then was eventually shipped. Or half of it, anyway.

Announced on October 13, Apple’s new iPhone launch had very much that was unlike any previous year. That started with how the launch was done with another supremely well made video — seriously, the Emmys should add a category for Best Performance by a Tech Executive in a Launch Promotional Series or Mini-Series.

Then this time Apple launched four new iPhones instead of three. And perhaps most significantly in these coronavirus times, it carefully altered the usual mix of features and price.

While the new iPhones, together with the iPhone SE and how Apple retains last year’s iPhone 11 Pro, the company has again got a phone for just about every price point. What’s different is that the whole iPhone 12 range offers features that might previously have been reserved for the higher-end Pro models.

They all have 5G, they now all lack a power adapter and earbuds, and all have the new Ceramic Shield on their front display glass. Speaking of which, there are tiny differences between those displays, but every model has an OLED Super Retina XDR display.

All four new iPhones have the same design, too, which brings the iPad Pro’s flat edges to the phones. This has been so popular that Apple’s got to be wondering what it can do with the iPhone 13 to keep up.

In making the new iPhone 12 range affordable, at least with some models, yet keeping major features across every phone, Apple has made it both simple and hard to choose what to buy. If you were brand new to the iPhone at all, you could now just buy any of them and be sure of getting an extremely good phone.

That’s great, and it’s especially great for the entry-level iPhone 12 model, but it means a lot more head-scratching if you’re comparing the iPhone 12 to the iPhone 12 Pro.

It’s also the lowest-cost iPhone 12, even though many would’ve paid more to get the small form factor. So that could make it even more appealing than the iPhone 12 or the iPhone 12 Pro.

Similarly, the iPhone 12 Pro Max is going to have the best cameras, and significantly better than the rest.

That does make these two iPhone 12 models the right choice for many people, but during October 2020 when they weren’t available, they made that buying choice harder.

Or rather, it’s made the specifics of the buying choice harder, as it made the overall decision to buy a new iPhone more attractive. And in October 2020, we learned just exactly how appealing it is.

The analyst firm with the odd name but the good track record, Above Avalon, announced in October that it appears over a billion people are now using an iPhone. And that’s now as in right now, today, this moment.

So it’s not that Apple has sold a billion of them — we know it long blew past that number — but rather that at this moment, there are a billion people with an iPhone in their hand.

You can say that Android is more successful, and many people do, including Apple in its many 2020 legal cases. But there are countless different Android phones coming from myriad companies.

There’s only one Apple, and a billion iPhones. 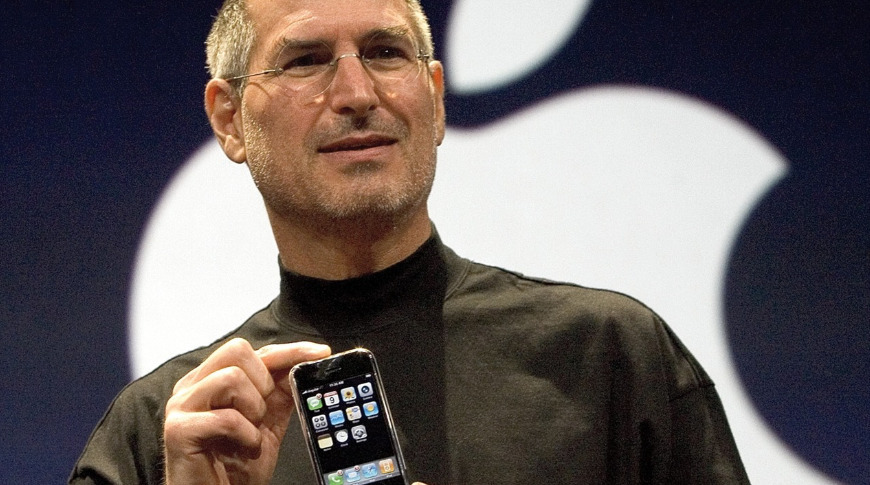 Steve Jobs with the first iPhone ever seen in public. There are rather more of them today.

This year, that’s at least in part down to how we reportedly have a deeper emotional connection to our Apple devices than most people do to most other companies. Surveyed specifically to see how brands were faring during the COVID-19 pandemic, MBLM asked people about emotional fulfillment from firms.

Apple came first overall. Using only results from men, Apple came second to Amazon, however as well as the top spot in total, it was also top of women’s votes and those of millennials.

Separately, research firm Piper Sandler claimed this month that 86% of teenage respondents to its survey said that they have an iPhone. Then 89% said they intend to buy one.

There are also quite a few iPads out there, and it does rather look as if those numbers are going to swell because of the iPad Air 4. Apple announced it in September but, quite unusually, both kept us waiting and didn’t specify a release date beyond next month.

Just as with the iPhone 12, though, the iPad Air 4 came with issues that affected buying decisions — although this time, all for the good. Over and over, reviewers, testers, and customers were coming to the conclusion that the iPad Air was the best iPad to buy.

It’s such a good combination of features, and price, that it has become hard to see why many people would buy the 11-inch iPad Pro. Bringing the same design, very similar features, and better performance meant Apple was again offering far more than usual in the lower-priced option.

Which is also a fair description of the one other hardware product Apple revealed this month. The HomePod mini had us all wanting one, and then when it was announced at $99, we all wanted more than one.

Before anyone has even got one to test, the HomePod mini has somehow become much more desirable than the original, full-size HomePod.

Not everyone loves Apple

October may have seen surveys saying we love Apple devices, and it may have seen Apple earning incredible amounts of our money even before we could buy the HomePod mini. Yet it was also a month where the company continued to be rather battered by criticism.

The now tedious Apple versus Epic Games dispute has continued with neither side offering much of a new level, and Facebook continued trying to make itself appear to be the poor underdog.

This time, “No Discovered Security Breaches in 0 Days” Facebook was arguing against the ad-tracking block that Apple keeps saying it’s going to add to iOS 14. Facebook wasn’t alone this month, as a coalition of publishers and advertisers in France lobbied their government to investigate Apple over unfair competition.

They maintain that every advertiser except Apple will require users to positively elect to allow ad tracking. Apple says yes, but no, because it doesn’t sell its ad-tracking data to anyone else, so you can’t really say it’s the same thing.

October also saw the House Judiciary decide that Apple has monopoly-like power with the App Store. Apple objected “vehemently,” saying that, “our company does not have a dominant market share in any category where we do business.”

Or rather, Apple and its current management team objected. Ex-App Store manager Philip Shoemaker said that Apple had always used the App Store as “a weapon against competitors.”

The House’s examination of Apple — along with big tech firms such as Google, Amazon, and Facebook — was this month just one of the worldwide pressures facing the company. The EU in particular has Apple on what’s being called a “hit list” of tech companies that it wants to apply stricter rules to.

That said, the EU’s chief antitrust executive, Margrethe Vestager, is one of the voices speaking out against breaking up large technology firms. She’s pursuing the plan to implement these more stringent trading and taxation rules, and thinks breaking firms up is a remedy with potentially unintended consequences.

One area we’re looking at for consequences is how Apple may be affected by the Department of Justice deciding to sue Google. The DOJ argues that Google paying Apple billions every year to keep being the default search engine on iOS is a problem.

Talking of worldwide consequences that, if not unintended, were at least not predicted, it was during this month that we really learned how not all 5G is created equal. If you’re in America, it’s likely that you’re still waiting for mmWave 5G, basically the version that has all the speed everyone promises in 5G.

Then even in the US, there were reports that Dual SIM users wouldn’t get 5G on either of their lines. That may or may not be true, and it may be that Apple can fix it with an update.

None of this seemed to stop many of us from buying the new Apple devices. Around the world, customers lined up outside Apple Stores, and those of us waiting on deliveries soon found that demand was so high that we were going to be waiting a lot longer.

A look into the future

All of which accounts for Apple’s earnings call, where the company revealed that it had earned more than expected this quarter. At $64.7 billion, that’s more than analysts predicted — but repeatedly, Apple said that the figures were better than their own internal estimates.

That probably didn’t include sales in China, which the earnings call tried hard to skip over as quickly as it could. However, it did include what turned out to be a record for Mac sales.

During the last quarter, Apple sold $8 billion worth of Macs. “[This] was an all-time high for Mac in the history of the company. And not just by a little bit, by $1.6 billion, so it was a substantial difference.”

Tim Cook kept using the word “bullish” like he’d just learned it, and maybe that’s why he also took the unusual step of speaking more about the future — even if only ever so slightly.

“Without giving away too much, I can tell you that this year has a few more exciting things in store,” he said.

He didn’t sound as if he were talking of things we already know about, such as Apple Silicon — and certainly didn’t drop any hint about the now expected A14T processor from Apple.

Nor did he seem to mean the MagSafe duo charger that’s been announced but isn’t shipping yet. He didn’t sound as if he were talking about Apple Fitness+, which perhaps some of us are covering our ears over and don’t wish to discuss at this time.

Perhaps he did mean all of this, though. What he definitely did not mean was Apple One — because he had already specifically announced that the bundle would just squeak into the month on the very last day.