Many users running iOS 14 beta are reporting that they are seeing a dialog box pop up repeatedly asking them to update from the latest ‌iOS 14‌ beta. 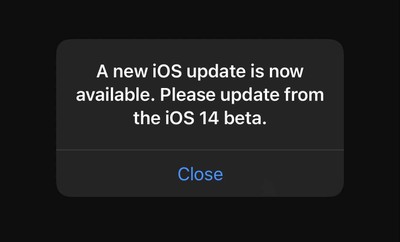 Threads in our forums, Reddit, and Twitter are reporting the issue. The dialog has been appearing for a few days now, but as of tonight has started appearing more frequently, every time an iPhone is unlocked. There’s been further discussion in our iOS 14.2 Beta 4 thread.

Getting the notification to update my iOS every time I unlock my ‌iPhone‌.
This issue was present like 5 years ago with one beta, the only way to stop it was by Apple having to push an emergency update, I remember it was the only time I was updating ‌iPhone‌ in the morning (in the EU) as they pushed it late night in Cali.

Previous betas have reportedly seen the same issue, according to postings in our forum.

Update: Some have mentioned that moving the iOS date back will prevent it from happening, though that has other consequences so we don’t recommend it.