Apple’s iPhone 12 lineup appears to be equipped with Qualcomm’s Snapdragon X55 modem, which is in line with rumors that we heard about the new devices prior to their launch. 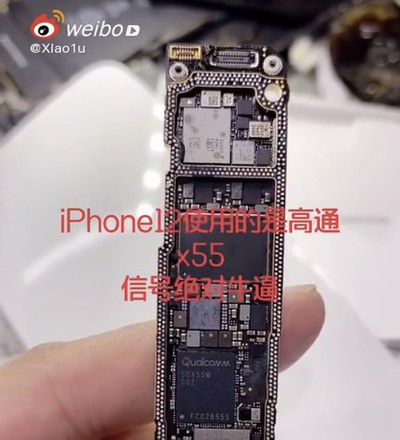 An
iPhone 12 teardown video on Chinese social networking site Weibo gives a close look at the L-shaped logic board and the modem chip.

The X55 offers support for both 5G mmWave networks and 5G Sub-6GHz networks, along with 5G/4G spectrum sharing, and it is Qualcomm’s second-generation 5G chip after the X50.

Reports in 2019 indicated Apple would use the X55 modem in its ‌iPhone 12‌ lineup, and at the time, the X55 was Qualcomm’s fastest and newest 5G modem. Qualcomm in February 2020 introduced the X60 modem built on a 5-nanometer process, which is more power efficient than the 7-nanometer X55.

There was some speculation that Apple could adopt the X60 for the ‌iPhone 12‌ lineup, but the X60 likely came out too late in the ‌iPhone 12‌ development process to be considered for the new devices.

Next year’s iPhones will likely use the Snapdragon X60 modem from Qualcomm, which is the third-generation 5G modem chip that Qualcomm has manufactured. It will bring notable performance improvements in terms of battery draw, component size, and connectivity speed because it offers carrier aggregation for combined mmWave and sub-6GHz networks.

Apple used Intel chips for the iPhone 11 lineup, but switched to Qualcomm’s technology after it became clear that Intel would not be able to manufacture 5G modem chips. Apple settled a long-running legal battle with Qualcomm to get access to Qualcomm’s chip technology.