The backlighting system of MacBook Pro keyboards could be upgraded to include TrueTone capabilities, with Apple examining the use of multiple LEDs per key to make the light seem even despite changes in the local environment.

Apple’s TrueTone technology has been useful for its customers for a while, with it enabling the colors of the display to seem the same when the user moves the screen through an environment. By monitoring the light in the local area, TrueTone automatically adjusts the color output of the display so the colors seem to be the same to the user at all times, at least relative to their surroundings.

One often overlooked area for TrueTone is the keyboard, as backlighting systems typically only display one shade of white light, or depending on the vendor, another color entirely. In such systems, the backlight doesn’t change to match the environment, remaining static and potentially seeming brighter, dimmer, or more blue following movement.

The exception to this are keyboards by some vendors that include RGB backlighting, with effects to make the keyboard entertaining and pleasing to look at, as well as to potentially provide instruction by highlighting keys in use. However, these keyboards do not generally provide TrueTone-style capabilities.

In a patent granted by the US Patent and Trademark Office on Tuesday titled “Mixed input lighting using multiple light sources and control circuitry to change a combined white light spectrum based on ambient light data,” Apple suggests such a TrueTone-for-keyboards system.

In short, Apple’s proposal involves the use of an external ambient light sensor to feed data into a system that determines what type of light should be output by the keyboard backlight. The control circuitry then instructs the backlight to combine light from multiple LEDs to generate specific types of white light, which are output through the key.

The concept is extremely similar to a version published in April titled “Electronic devices having backlit keyboards displays with adjustable white points,” but the latest patent is far more explicit in how it accomplishes the generation of the light itself.

According to the October filing, Apple outlines a few ways this could be accomplished, including the use of two LEDs that emit light with different white light spectrums, which are combined and shine through a window in the key cap. By controlling the output of each LED, the tone of light can be adjusted. 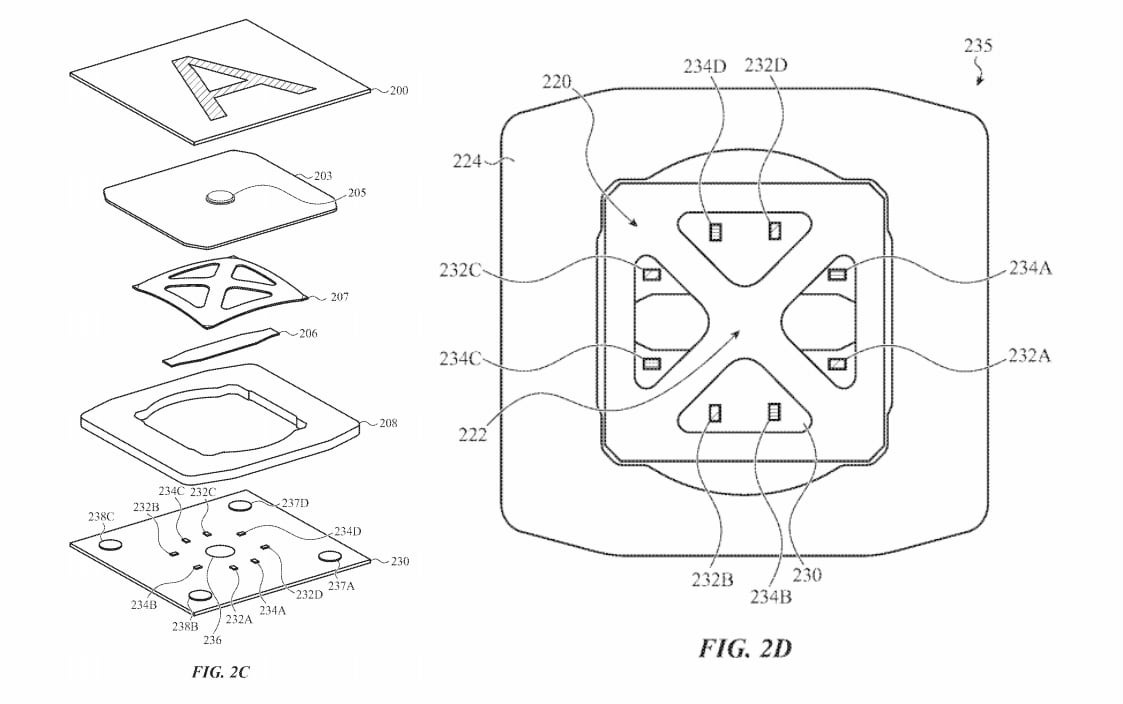 The key stack, showing how the LEDs in the bottom layer shine through to the top.

As well as using LEDs with different light spectrums, Apple also suggests each can have different phosphor coating thicknesses. Doing so would enable the LEDs to be produced the same way, but for the light itself to be adjusted by the phosphor coating.

Apple also suggests the coatings could be produced from “yttrium-aluminum-garnet phosphors,” and that the coating could be applied to part of a housing for each LED, rather than coating the entire component.

There is also the suggestion that this could be done using three LEDs rather than two white-based versions, by using the properties of RGB lighting to use red, green, and blue LEDs. By combining light from each at different levels, this again can create light with a varying level of warmth.

By using controllable LEDs, Apple also offers the possibility of using the keyboard to alert the user to events, such as by adjusting the color warmth to be a visual indicator. This could be more prominent in the three-LED version, with the light completely changing color to a bright red, for example.

One element that marks this patent as different from the April version is how it goes into more detail about how the LEDs are used. It includes drawings of a key cap stack, including an arrangement of the LEDs around a raised bubble section in the middle, with each positioned to line up with gaps to maximize the light output through the key cap’s window without obstruction.

There is also discussion about mounting the LEDs to a surface facing the underside of the key cap, as well as on the base of the key cap itself. In this latter scenario, light would shine into the cavity of the keyboard and be reflected back through the key cap window, giving more distance for light to travel from the LEDs, disperse, and mix before being seen by the user.

Originally filed on October 18, 2019, the patent lists its inventors as Paul X. Wang and Liquan Tan. 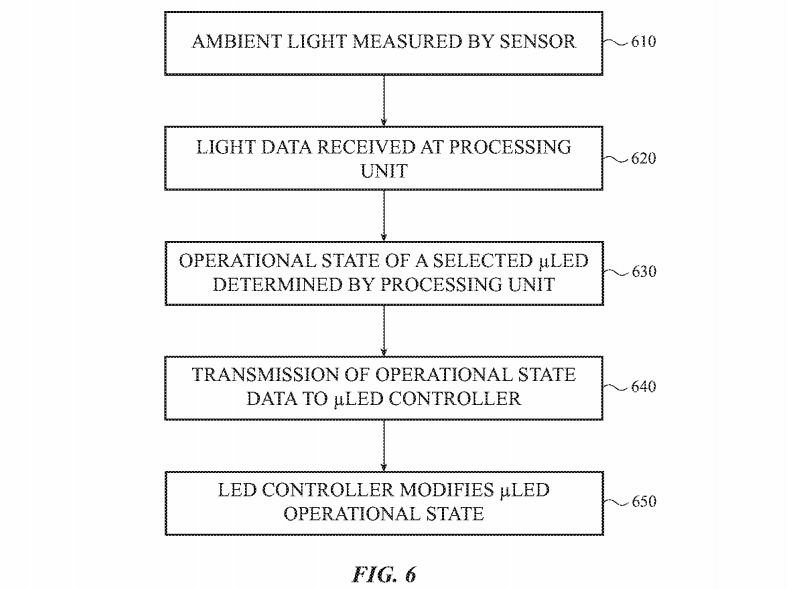 A flowchart for a TrueTone-style keyboard backlight system

Other potential ways Apple may change the keyboard have been highlighted in patents such as using glass for strength and transparency, and a “keyless keyboard”“keyless keyboard” that uses haptic feedback to mimic key presses.