Following an announcement earlier in the month that “The Snoopy Show” will launch on Apple TV+ in 2021, today WildBrain revealed that a collection of new one-off specials will also be coming to Apple TV+.

These specials will include the popular characters celebrating Mother’s Day, Earth Day, New Year’s Eve, and going back to school. Besides the new series and specials, fans can also expect a 70th anniversary documentary film coming next year on ‌Apple TV‌+. 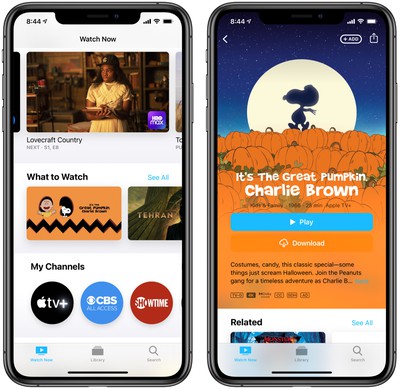 In addition to the new content, ‌Apple TV‌+ is getting iconic Peanuts specials, including “A Charlie Brown Christmas,” “Charlie Brown Thanksgiving,” and “It’s the Great Pumpkin, Charlie Brown.” The Halloween special will premiere on ‌Apple TV‌+ today for subscribers, and then it’ll be free for everyone in the TV app from October 30 through November 1.

Apple first inked a deal with WildBrain (formerly DHX Media) back in 2018, agreeing to be the exclusive home of new Peanuts content. The first of these shows was “Peanuts in Space: Secrets of Apollo 10,” for which Apple won an Emmy.