During its “Time Flies” event yesterday, Apple announced that iOS 14, iPadOS 14, watchOS 7, and tvOS 14 will be widely released today, providing developers with just one day’s notice to submit their optimized apps for review. 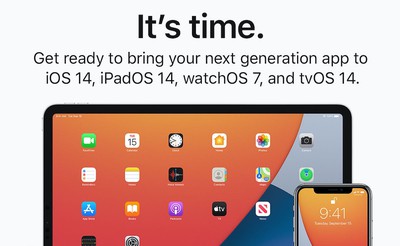 I would like to thank @apple for giving developers less than 24 hours notice on the release of iOS 14. Zero time to submit our apps that support iOS 14’s features. 😕
— Aaron (@AaronTunney) September 15, 2020

I wouldn’t say that. It’s two eternal problems:
– Apple’s hardware release dates dictate their software release dates, not the software quality or readiness.
– Most of Apple seems to have *far* too little of an idea of the challenges and conditions faced by outside developers. https://t.co/uWGwlkYEvl
— Marco Arment (@marcoarment) September 16, 2020

iOS 14, iPadOS 14, watchOS 7, and tvOS 14 should be released to the public around 1:00 p.m. Pacific Time today. We’ve shared a
list of compatible devices for each software update here. Note that Apple has yet to announce a release date for macOS Big Sur.