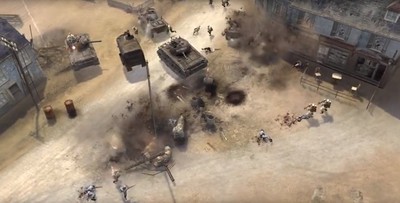 Originally developed for Windows by Relic Entertainment, the critically-acclaimed RTS was recently designed and developed by Feral for the ‌
iPad‌, which has now become a universal app.

The game sees players command two crack companies of American soldiers and direct an intense campaign in the European Theater of Operations starting with the D-Day Invasion of Normandy.

Feral has optimized the game for ‌iPhone‌, and it features the same sophisticated command wheel and command panel options seen on ‌iPad‌ that let players execute real-time tactics, adapt to constantly shifting environments, and do battle with the opposition to secure the liberation of France.

According to MacRumors sister site TouchArcade, on first look the jump to ‌iPhone‌ is very impressive.

I played the game on an older iPad Pro for review and everything is more responsive on my iPhone 11. It runs at 60fps without battery saver mode turned on and loads much quicker than the ‌iPad Pro‌. I was a bit concerned with the interface but there are some new control options to try for interactions that help a lot.

“Company of Heroes” is officially supported on all iPhones released since the ‌iPhone‌ 6S, and is
now available on the App Store for £13.99 / $13.99 / €14.99. Players that already own the game on ‌iPad‌ can install the ‌iPhone‌ version for free.