Apple this morning announced an upcoming September 15 event, and shared a YouTube placeholder video for the livestream that will be available on that date.

Metadata for the YouTube video includes several keywords as noted by
Guilherme Rambo, and one notable inclusion is a mention of the “Series 6,” which is an
Apple Watch that does not yet exist.

Bloomberg earlier today said that the September 15 event will not be focused on the iPhone as most September events are, with Apple instead planning to unveil new ‌Apple Watch‌ and iPad models. A separate event for the iPhone 12 is expected later in the fall, likely in October. 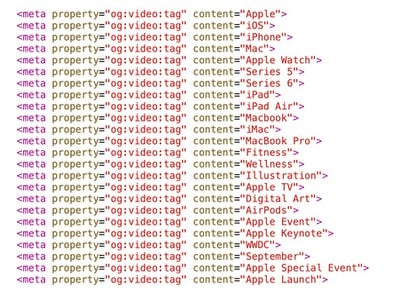 The specific mention of the Series 6 ‌Apple Watch‌ lends credibility to
Bloomberg‘s claim, and seemingly confirms we can expect to see new ‌Apple Watch‌ models.

Apple is clearly trying to hit important keywords to attract those searching for related terms, but aside from the Series 6 mention, these are all existing products and it’s difficult to determine what else we might see at the event.