Apple maintained its lead in the global wearables market in the second quarter of 2020, according to research conducted by IDC. 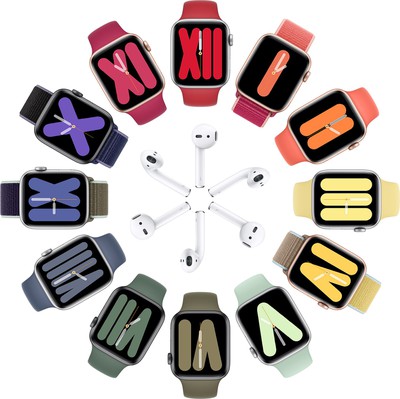 The market for wearable devices grew 14.1% overall during the second quarter of 2020, thanks to strong demand for “hearables,” such as AirPods, and continued interest in health tracking metrics amid the global health crisis. The top vendors such as Apple, Huawei, and Xiaomi gained market share, while other vendors struggled to attract new customers. Fitbit notably declined by 29.2 percent.

Apple shipped 5.9 million more wearables in the second quarter of 2020 compared to the same time last year; an increase of 25.3 percent. The company’s market share of wearables grew from 31.1 percent to 34.2 percent. Huawei followed at a distant second place, shipping 18.5 million units less than Apple.

Hearables showed considerably stronger demand than smartwatches and fitness trackers, growing by 32.6 percent, and accounting for 60 percent of all wearables during the quarter. Apple led the sector again here, shipping 23.7 million ‌AirPods‌ and Beats devices in total, followed by Samsung and Xiaomi.

Apple is expected to launch new AirPods and Apple Watch Series 6 models in the immediate future. The upcoming products will likely help Apple maintain its dominant lead in the wearables market.