Samsung’s latest and greatest smartphones have arrived in the form of the Note 20 and the Note 20 Ultra, so AppleInsider compared their spectacular cameras with Apple’s own iPhone line to find the better snapper.

We were thrilled to get our hands on the new Note devices, with Samsung touting some amazing new upgrades for the cameras. Between the high resolution, incredible zoom, and 8K video, there was a lot to check out, so we hit the road to capture some stellar shots that show off the camera’s abilities.

While there are some sample images included in the piece, check out the video for all our test shots.

A look at the specs

One thing to remember is the iPhones are now roughly a year old, with iPhone 12 inching closer to release. This is still a useful comparison, however, as the iPhone 11 line will be around for some time, and is still the most current iPhone to compare against. 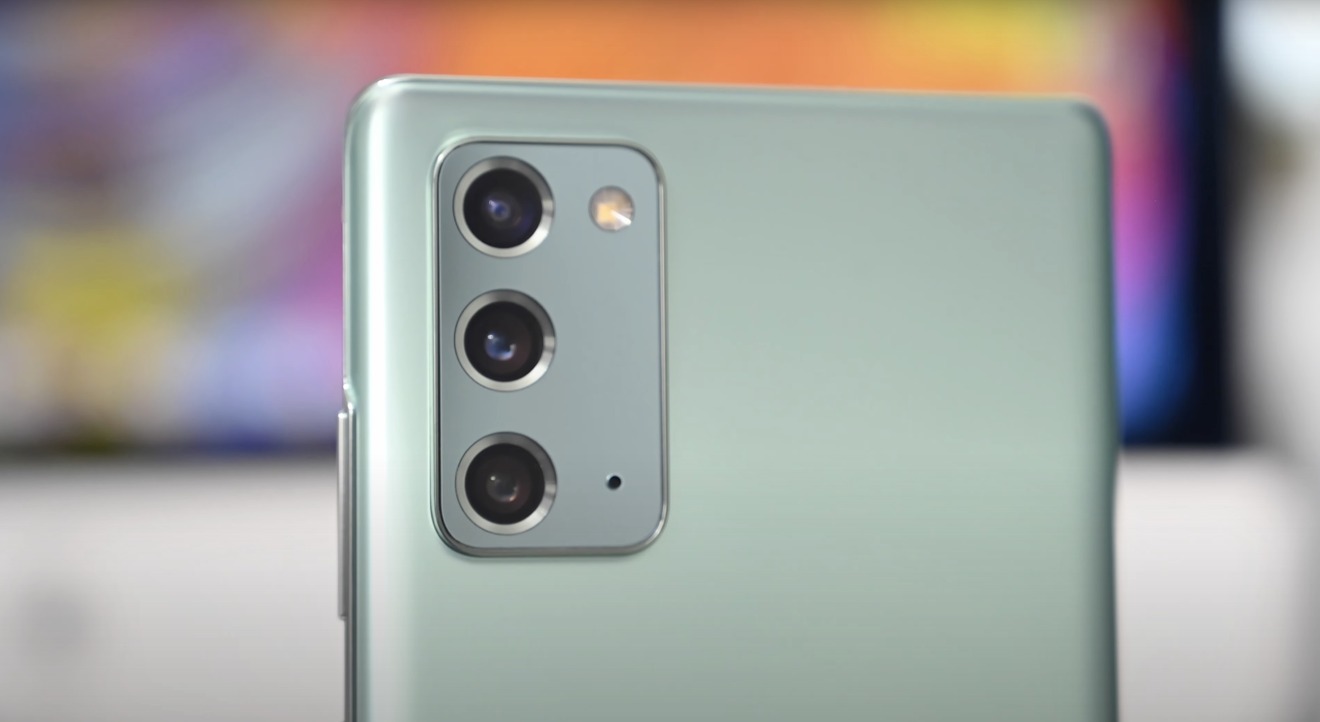 Taking a closer look at the cameras, all devices sport a 12MP ultra-wide angle lens. It’s the other lenses where it gets interesting.

The Samsung Galaxy Note 20 sports a 12MP wide-angle lens as well as a 64MP tele lens. Those two lenses combined are able to offer 3X hybrid zoom as well as a maximum of 30X digital zoom.

The Samsung Galaxy Note 20 Ultra is packed with a 108MP wide-angle lens alongside a 12MP tele lens. It is able to obtain 5X optical zoom and 50X digital zoom. 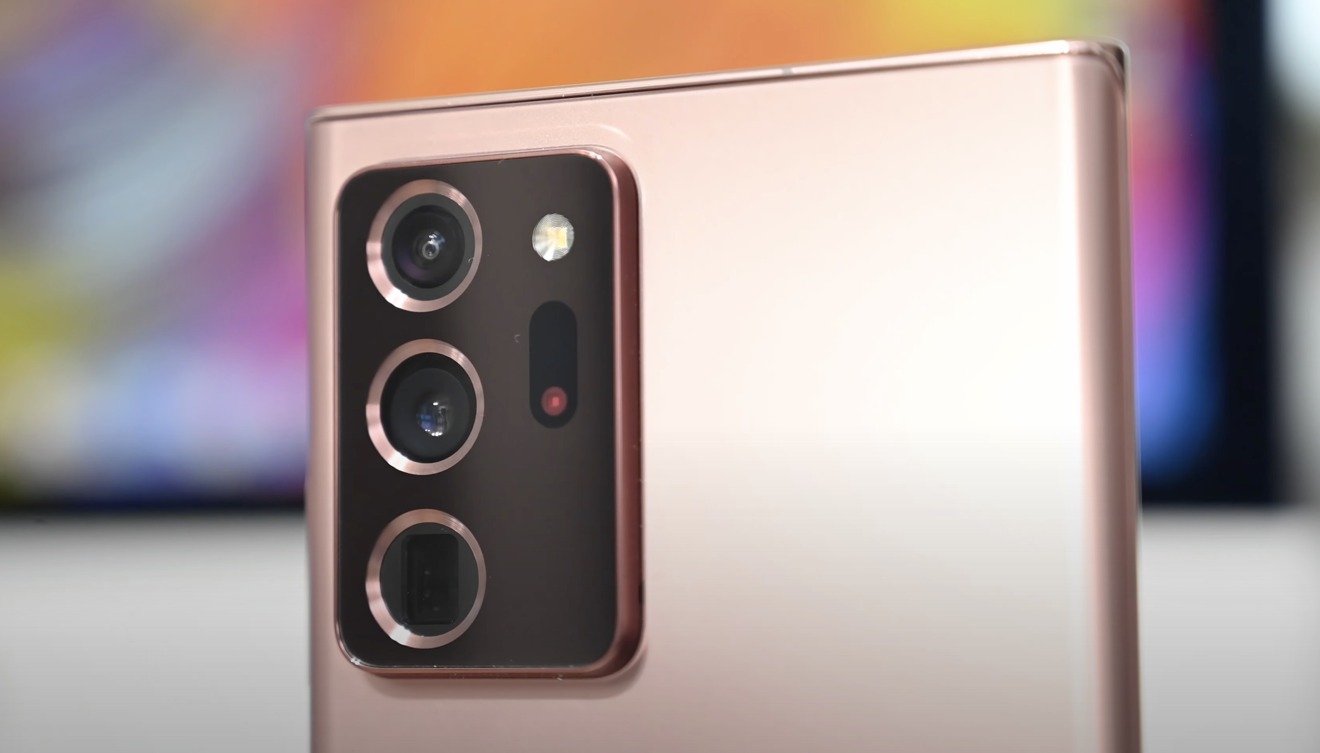 It is good to see that Samsung listened to its audience and pulled back from the 100X “super zoom” offered with the S20 line. Photos produced at 100X were grainy at best, and largely unusable.

It seems each year there are more and more facets to these cameras just in the stock camera apps let alone with third-party apps can pull off. We don’t want to spend too much time on all of these, but wanted to give some general impressions of our time using them.

Both phones still include a portrait-like shooting mode, which Apple calls Portrait mode and Samsung calls Live Focus. These haven’t changed much since the last phones we tested.

Samsung still leans towards the “fun” side with effects such as swirls of the background as well as the normal blur. Apple has focused very much on replicating real-world lighting effects and as a general rule creates a more polished looking picture.

Which is better depends on which style you prefer. 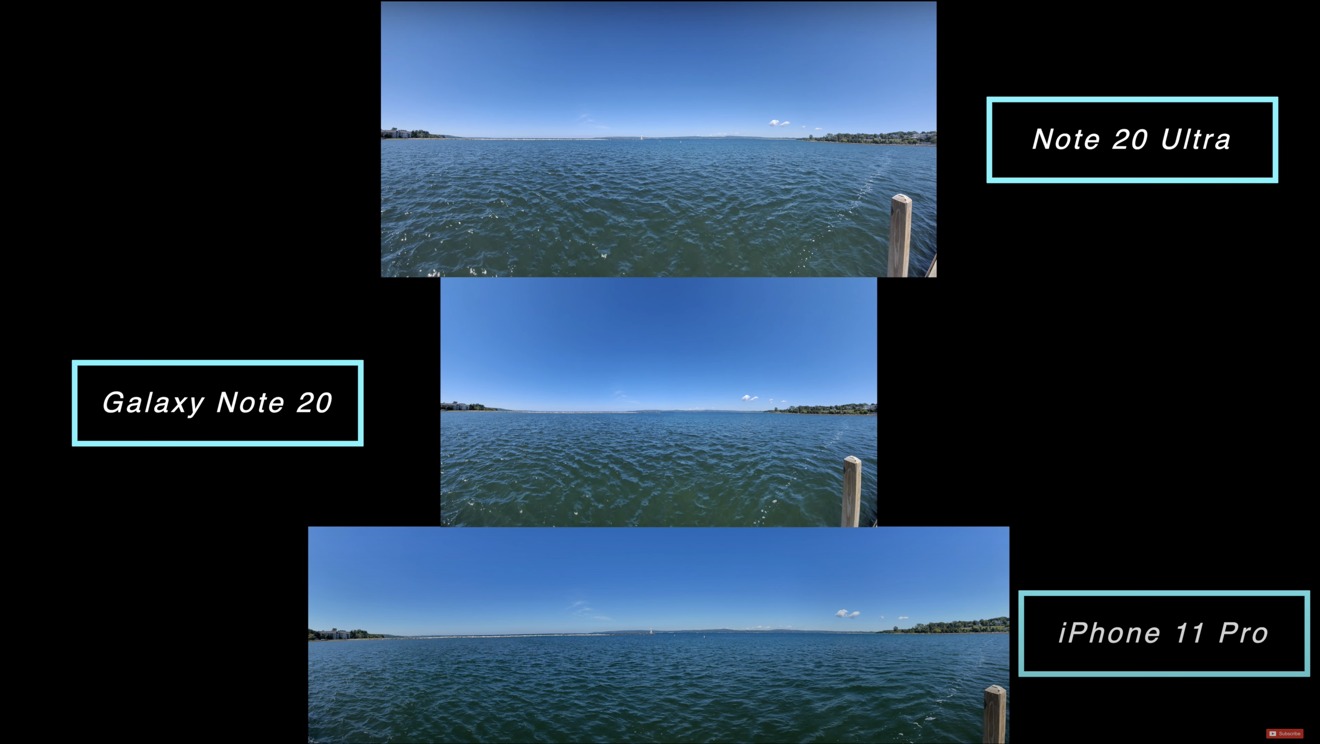 Panoramas are also a common shooting mode. We took a few sample pics across the phones and did our best to keep the same speed each time, yet, the photos ended up entirely different sizes.

The iPhone’s picture was the widest while the Note 20 was the most compact, and the Note 20 Ultra was somewhere in between. I prefer the wider look to these, because the more compact the image, the more distortion is apparent in tighter shots.

The wider shots also lend themselves more to large prints.

The final special feature we wanted to touch on was the impressive 108MP mode of the Note 20 Ultra. While it has that many megapixels packed onto the sensor, by default it shoots in a much more reasonable size, but User have the option to enable that massive 108MP resolution if they choose.

When we tested this, it didn’t make a huge amount of difference. Not much extra detail was picked up in the shot and you could zoom in a bit more, but at that point you may as well have just used the optical zoom offered by the phone to begin with.

For your normal, everyday shots, these cameras compared quite well. Samsung still has the slightly oversaturated look it is known for, and in some shots, this worked out OK.

The water images we took looked actually more true to life than the slightly parred back shots found on the iPhone. In the flower shots you can see below, the flowers were so oversaturated they lost a bit of detail and contrast.

In low light shots, such as of our pup Mosby below, the iPhone managed to pull out a bit more detail. Mosby was photographed with a three-second shutter in night mode on all three devices, and the Samsung Note photos look good, but just not quite as crisp.

We also did a seven-second shutter of the night sky. The iPhone again was slightly brighter — though grainy — and the Note 20 photos were unusable with almost all black in the images.

The image of our toasted marshmallow porter shows how much better the iPhone nailed focus. The bubbles in the head were super sharp while the Samsung still seems to have issues with the autofocus.

This year, Samsung is using lasers to aid in the focus, but on this picture of a curved cup, the autofocus decided to focus on the front of the clear cup rather than the top ring, the beer’s head, or the toasted marshmallow.

In general, the focus system does seem improved over the Galaxy S20. 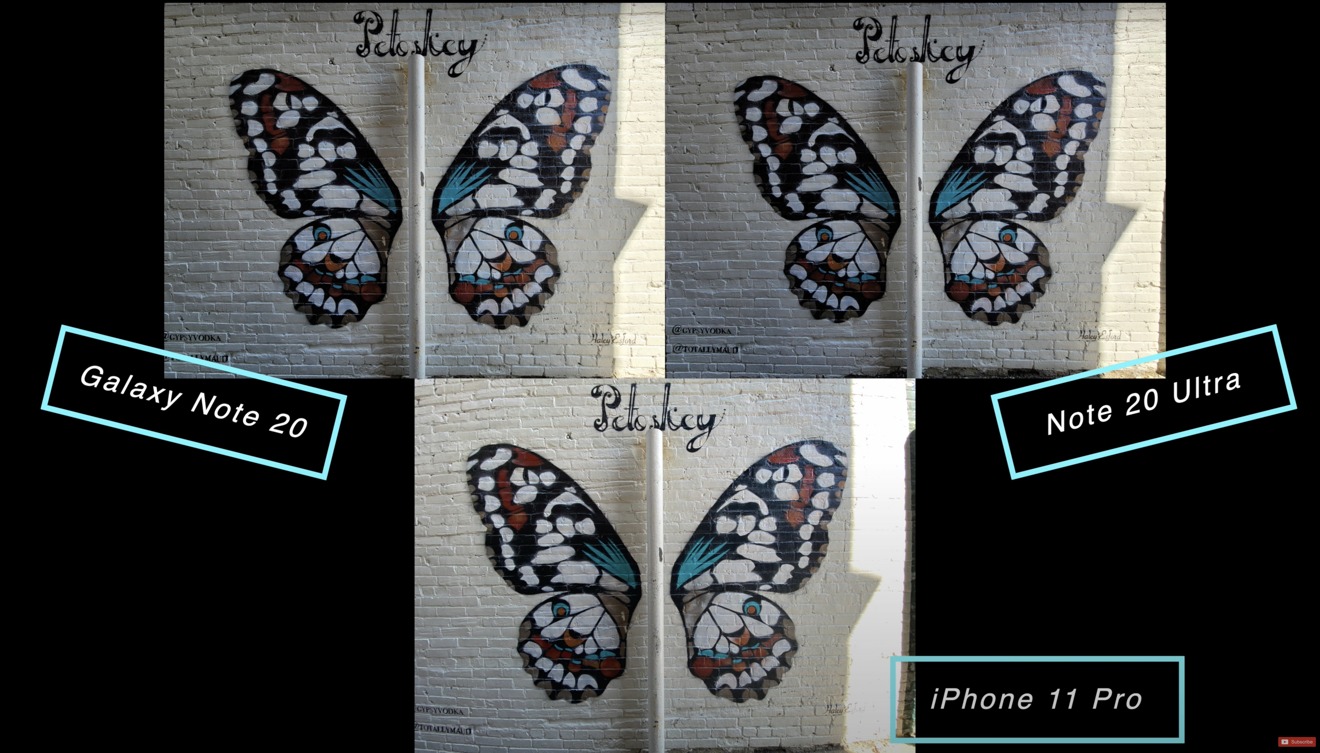 In this alley shot, the iPhone had better exposure 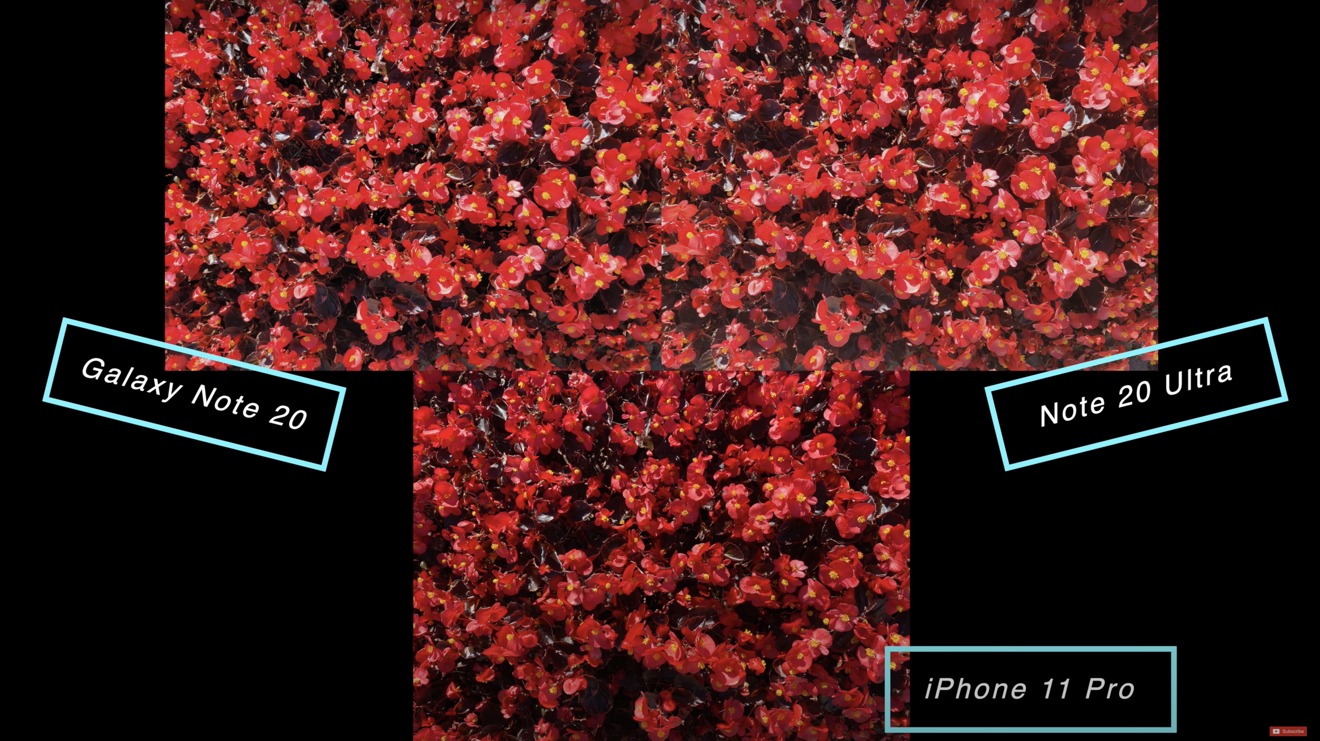 These flowers lacked contrast and were oversatured on both Note images 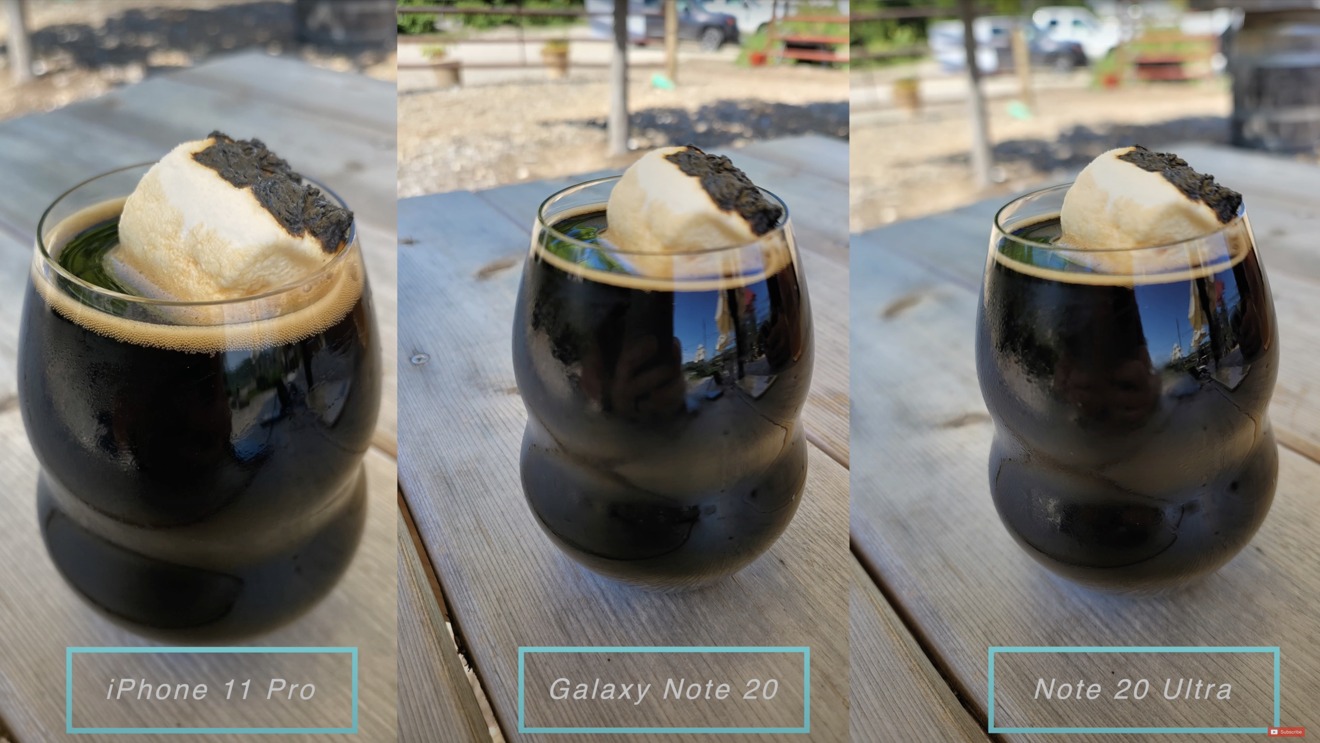 The Note’s focus was an issue here, focusing on the front left of the cup rather than the top 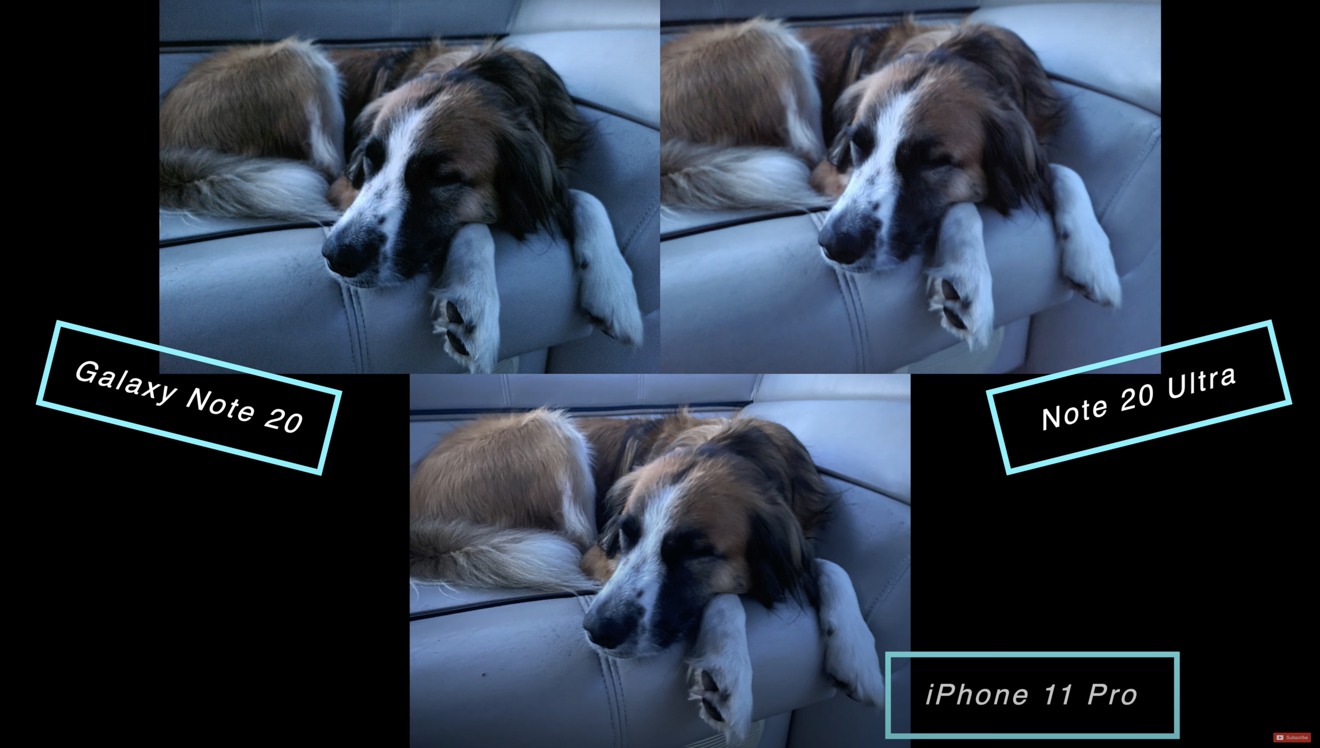 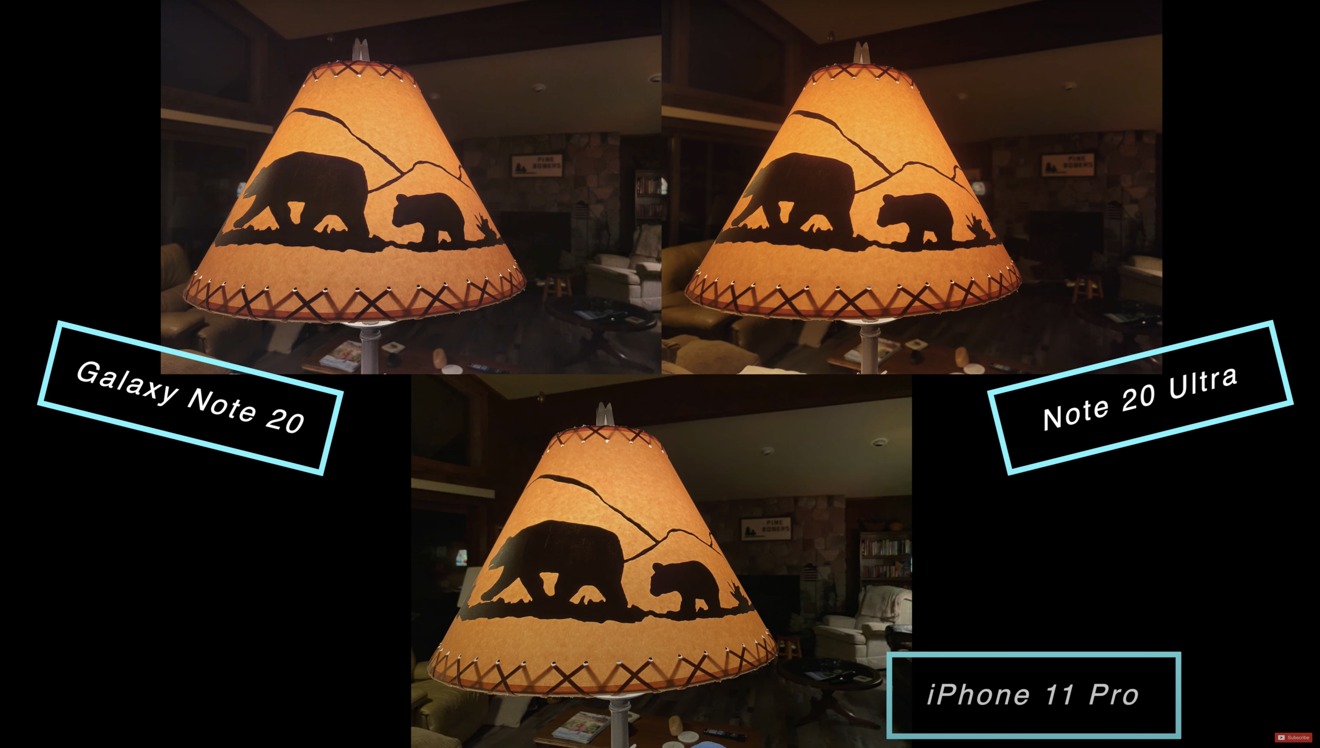 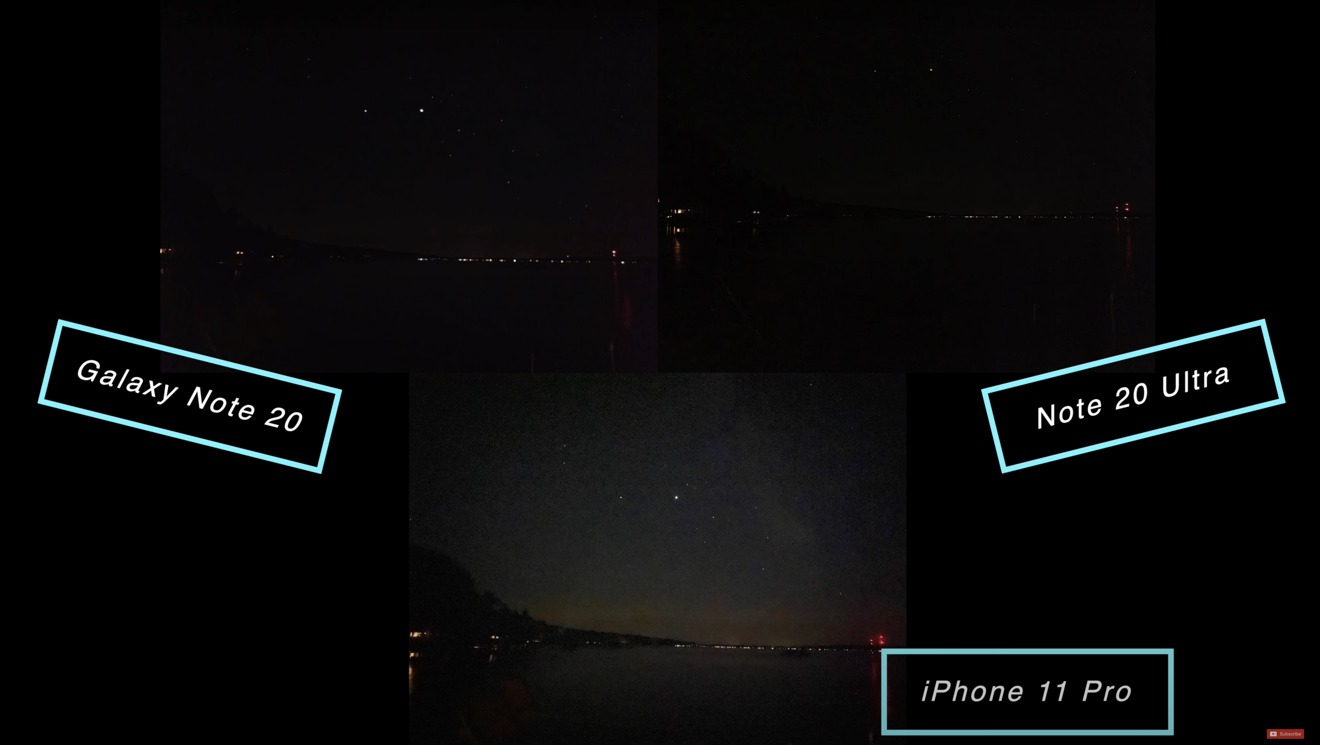 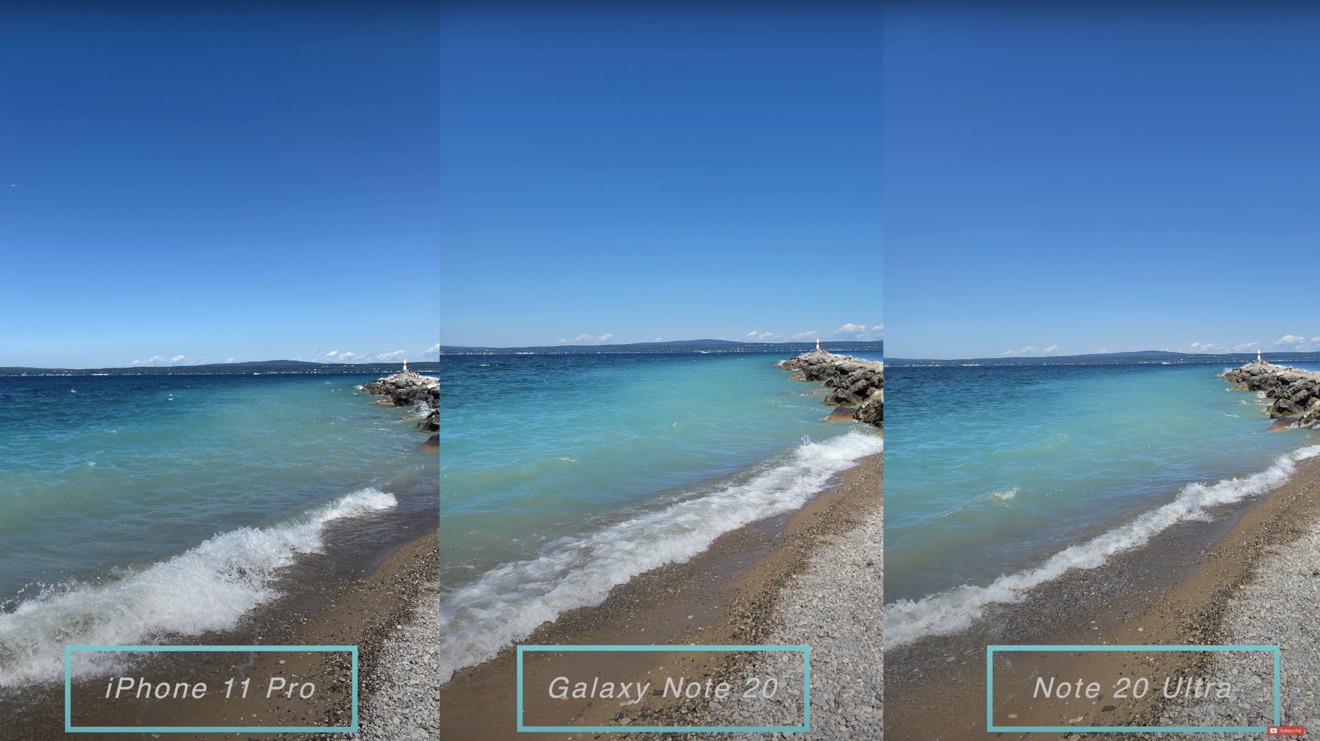 Where Samsung really shines is with the telescopic capabilities of its new devices. Both the Note 20 and the Note 20 Ultra blow away Apple in terms of picture quality. 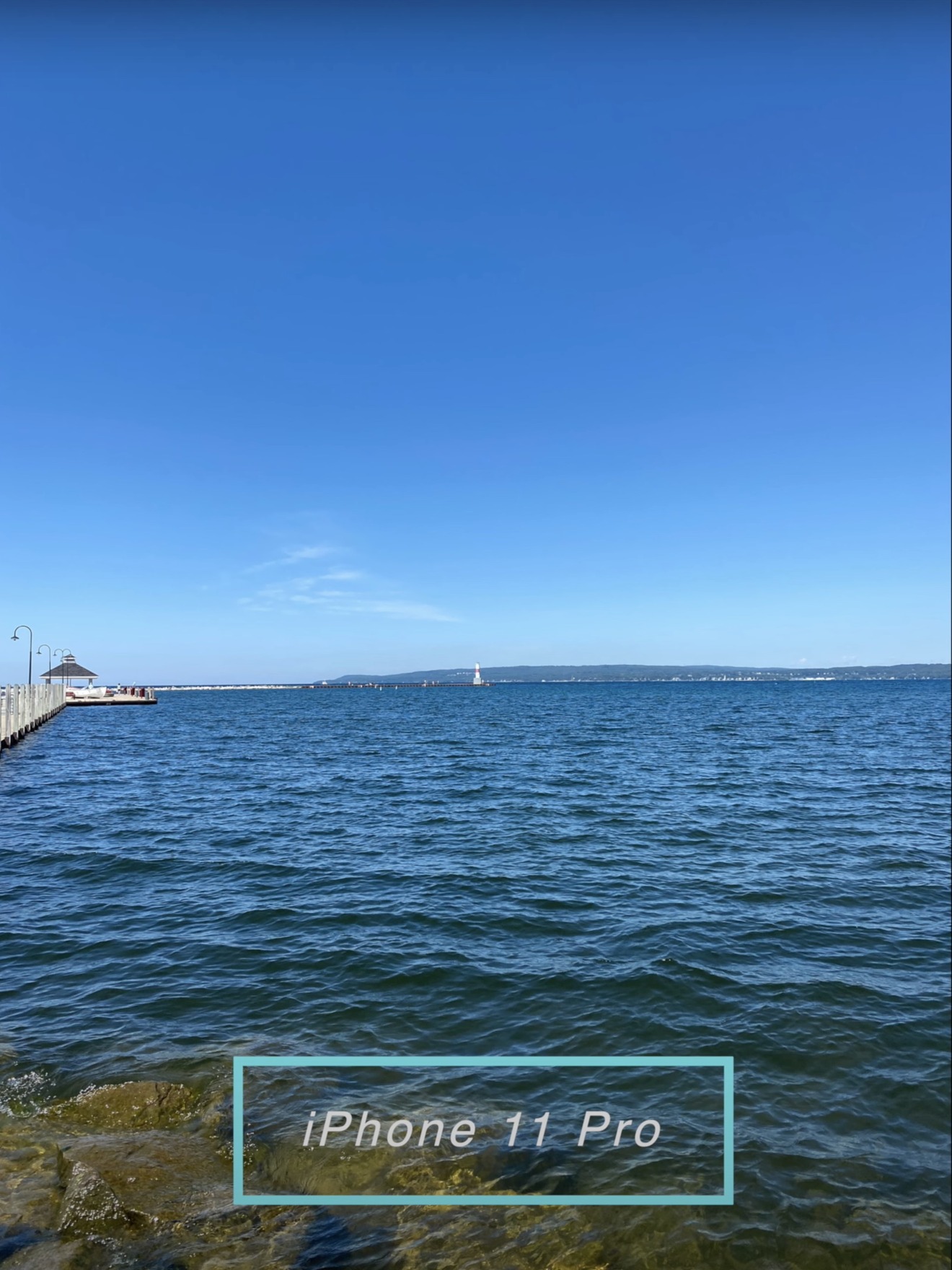 Our far away subject shot at 1X for our zoom test

In our samples, we shot a lighthouse that was a significant distance away. Our iPhone photograph at 10X looked just okay, but the Note 20 at 10X was far better due to its hybrid zoom and higher resolution tele lens.

The 50X shot from the Note 20 Ultra was sharpest at that level, though it too started to lose definition. 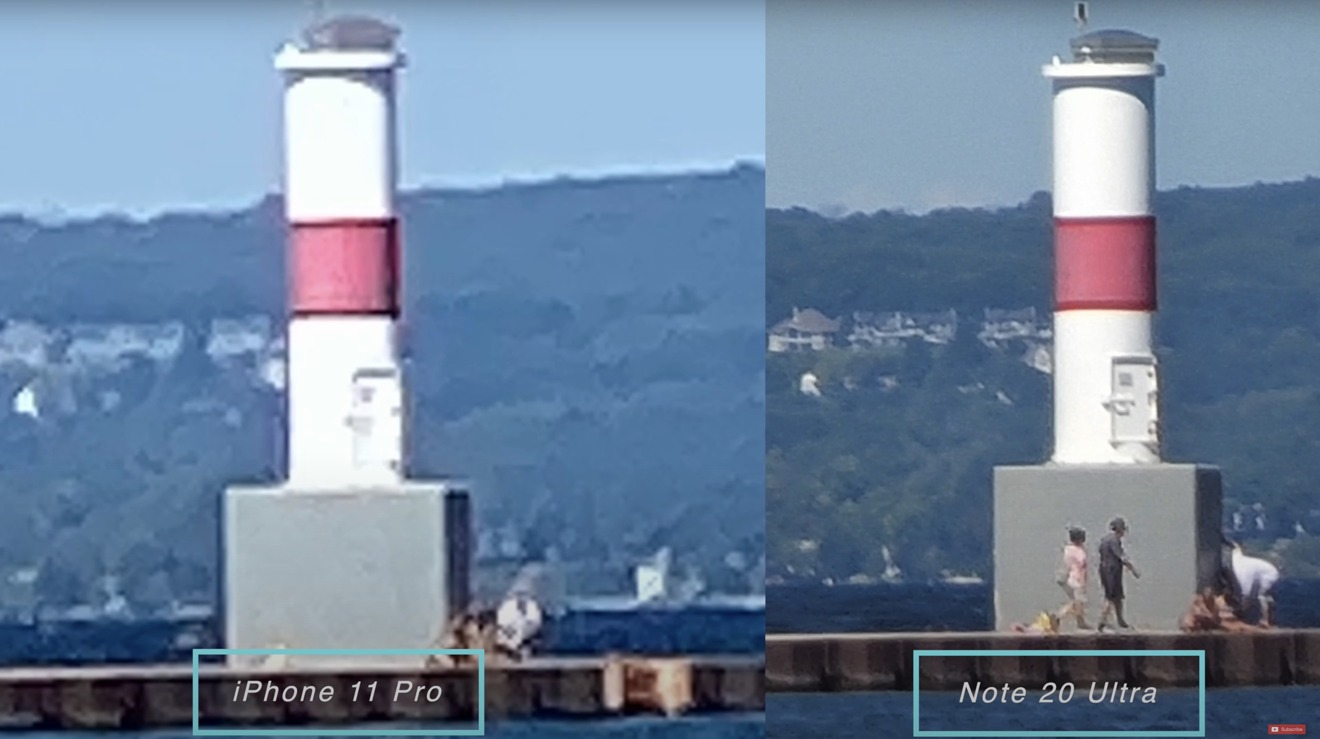 When we were zoomed into 50X and looked at a target that far away, it became increasingly difficult for us to keep the subject in the shot, which makes this level of zoom useless in moving situations. 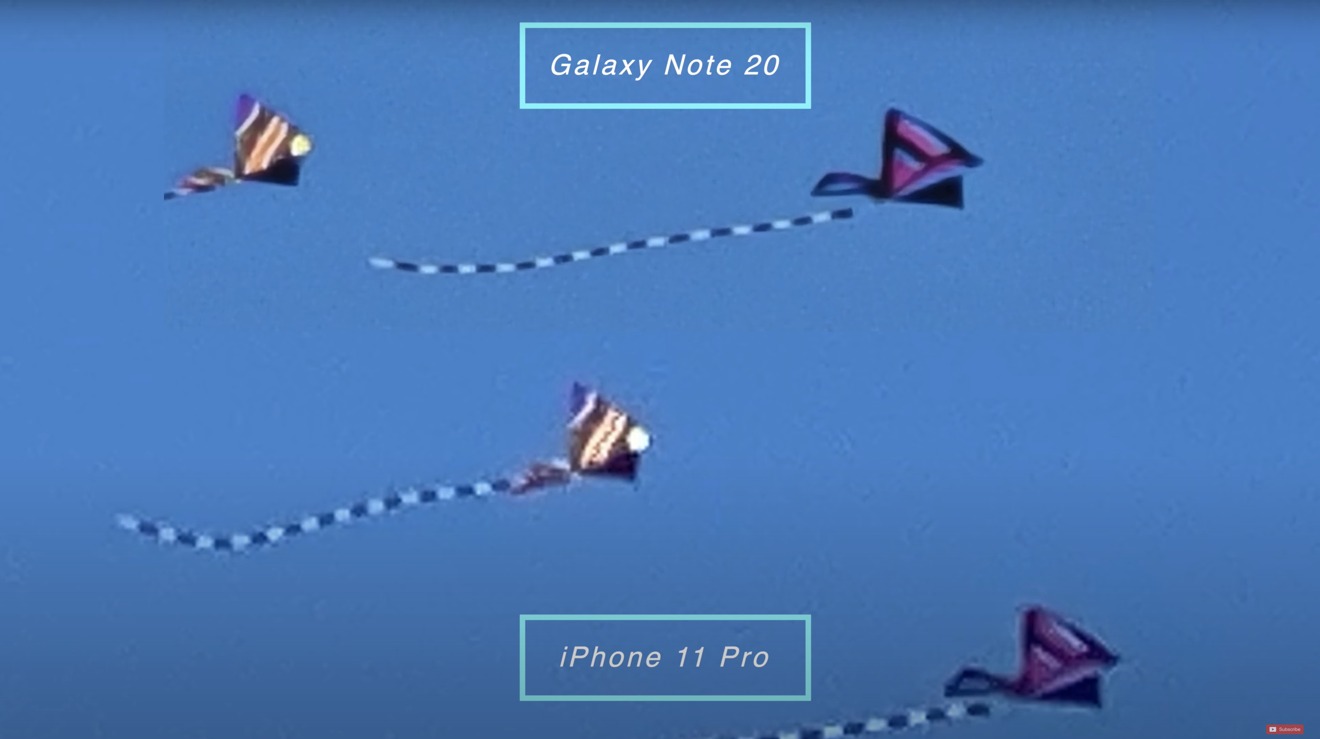 We wanted to test the zoom capabilities once more, so we took some pics at a bevy of kites flying through the air. When zoomed to 50X, the iPhone’s pictures were a distorted mess, while the Galaxy Note 20 Ultra was very easy to discern what we were looking it.

It may not be sharp enough to do anything with, but in some situations, it can create very usable photos. 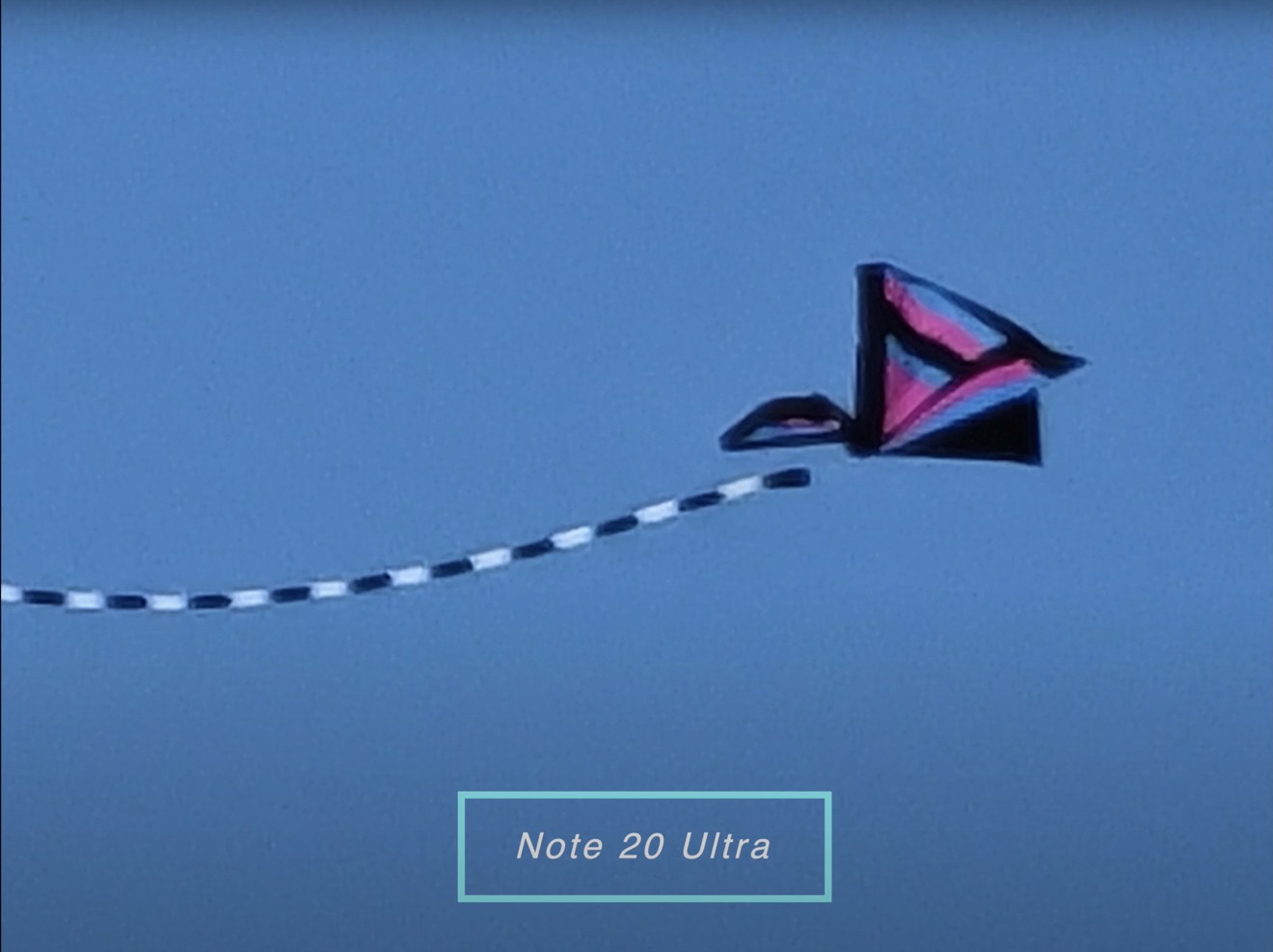 The Note 20 Ultra at 50X is even better than both

This camera comparison was particularly focused on the photo capabilities, but we have to at least mention video. We toyed around with this a bit and are so excited by the prospect of incredible 8K video recording coming to smartphones.

It is true that there aren’t many 8K TVs or monitors in people’s homes, but when shooting in 8K, you can crop in the video to still maintain at least 4K resolution. You’re limited to only 24 frames per second on the Notes but that is more than enough, making it a potentially invaluable tool for mobile filmmakers.

On iPhone, we are still limited to 4K at 60 frames per second. Fingers crossed we see improvements in this area on the upcoming iPhone 12.

So which is the better shooter?

Picking a winner here is hard. In everyday shots, we leaned a bit towards the iPhone the less saturated images, better focus, and better portrait mode. The overall tone of the image though can be adjusted after the fact, so if it is a white balance, contrast, or saturation issue, that can all be tweaked a bit after. 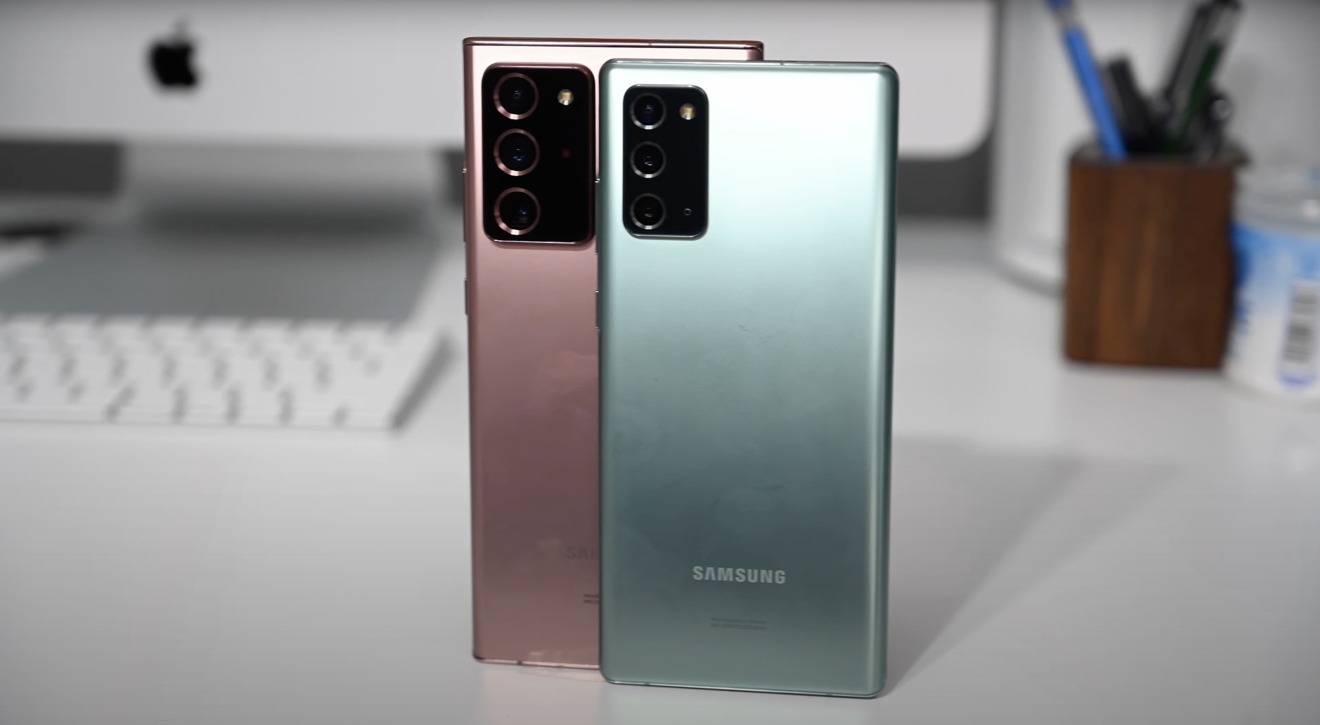 Samsung knocks it out of the park with the tele capabilities here. Some extreme zoom shots may be too distorted to be usable but even the 10X images look far better than the iPhone’s 10X images.

Apple very much needs to step up its game when it comes to the zoom. Apple’s strategy seems to be prioritizing your typical shots and the wide-angle lens, but if you want anything past 5X, the images very much begin to suffer in this comparison.