With Fortnite currently banned from the App Store and Epic Games on the verge of having its Apple developer accounts terminated for violating ‌App Store‌ rules by rolling out its own payments system for in-game currency, Epic is hosting a #FreeFortnite Cup this Sunday for “one more Victory Royale with friends across all platforms.” 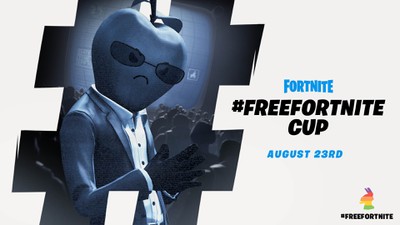 Fortnite users who already have the game installed on their iOS devices are currently able to continue playing the game, but they will be “left behind” when Chapter 2 – Season 4 launches on August 27 as Epic won’t be able to push the game update to those users.

As part of #FreeFortnite Cup, Epic is offering a host of prizes ranging from an in-game outfit and a physical “Free Fortnite” hat to hardware such as Alienware laptops, Samsung Galaxy Tab S7 tablets, OnePlus 8 phones, and Xbox One X and Nintendo Switch gaming systems.

If you’re left behind on iOS after the Chapter 2 – Season 4 launch, the party continues on PlayStation 4, Xbox One, Nintendo Switch, PC, Mac, GeForce Now, and through both the Epic Games App at epicgames.com and the Samsung Galaxy Store. Join the fight against @AppStore on social with #FreeFortnite.

All of your friends. Awesome prizes. And one bad apple. We’re droppin the #FreeFortnite Cup.

Finally, Epic is sharing tips for iOS users worried about being unable to continue playing Fortnite, recommending that they make sure their game data is stored in their Epic accounts and investigate alternative Fortnite-compatible devices where they can simply pick up where they left off. For Android users, Epic notes that users can still install it through other means such as Samsung’s Galaxy Store or sideloading, despite the game having also been pulled from the Google Play store.