Future Apple devices ranging from “Apple Glass,” regular iPhones, or even an “Apple Car” may use stereo separation to get users to turn toward where a sound seems to be coming from.

We’re already used to Siri telling us when to turn left or right, whether it’s through CarPlay, our AirPods, or just our regular iPhone. That means we’re also used to podcasts being paused and music volume dipping, but now Apple wants to improve on all of this. From not interrupting us, to giving us better directions, future Apple devices may alter where what we’re listening to appears to be coming.

“Spatial Audio Navigation,” is a new patent application, which sets out to describe how audio can be used to guide users in the real world or with AR and Mixed Reality (MR).

“Conventional navigation applications may provide vocal directions such as ‘turn left’ or ‘turn right’ to direct users to destinations,” says the patent application. “However, a user, for example while walking or riding a bike, may be listening to an audio source (e.g., music, an audio book, a phone call, etc.) while using a navigation application, and may prefer for the audio not to be interrupted by vocal directions.”

So instead Apple proposes using “directionality and distance of sound played through a binaural audio device to provide navigational cues to the user.” So long as they are listening in stereo — over “Apple Glass,” headphones or car speakers, for example — then Apple can “thus use the spatial location of the apparent source of a sound to guide the user in a certain direction.”

“Thus, the music is not interrupted, and [this provides] a subtler method to convey navigational information than conventional navigation applications,” it continues.

There’s more to it than making sure you can listen to the AppleInsider podcast uninterrupted, though. Apple believes that this spatial audio system is safer. 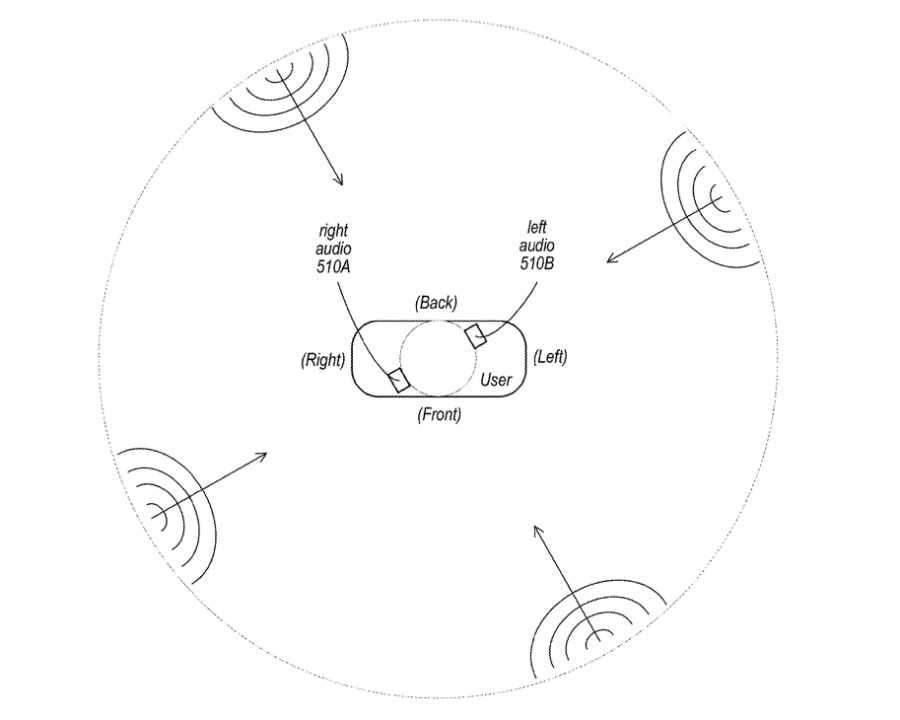 The rest of the patent application is concerned with the process of altering the audio’s position in stereo, or changing its volume. “[Other] aspects of the audio may be attenuated to affect the virtual directionality and distance of the audio, including but not limited to frequency and reverberation,” it says.

This application is credited to six inventors, including Avi Bar-Zeev and Rahul Nair, both of whom have previously worked on patent applications regarding tracking a user’s gaze in Apple AR.

The patent application also follows a separate but recent one covering a method by which “Apple Glass” could have an audio system that presents sounds as if coming from a 3D space.