As expected, Apple today introduced a bundle deal that allows Apple TV+ subscribers to subscribe to CBS All Access and Showtime for $9.99 per month combined. The bundle can be redeemed through the Apple TV app in the United States. 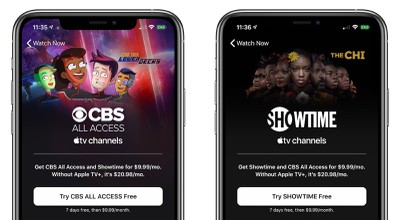 CBS All Access and Showtime usually cost $20.98 per month combined, so this bundle provides an over 50 percent discount.

CBS and Showtime are available through Apple TV Channels, a feature that lets Apple device users sign up for and watch various subscription television services right within the ‌Apple TV‌ app. Users still need to pay for the streaming services, but without the hassle of downloading an app and signing up separately.