Even though the new 27-inch iMac has received mostly minor updates, Apple’s upgrade decisions make it look as if the iMac Pro is on the way out.

On Tuesday, Apple updated the 27-inch iMac. The low-end model with improved camera, better microphones, and the T2 chip were welcome, but some of the upgrade options include a 10-core Intel Core i9 processor, and an optional nano-texture display change the ballgame.

One of the most significant updates in the new 27-inch iMac, for instance, is that option to have a nano-texture screen. That’s Apple’s anti-reflective technology for cutting down glare while maintaining display quality. and it was previously only available as a $1,000 addition to the Pro Display XDR.

That display is clearly only ever going to be bought by the most pro of pro users and the nano-texture is marketed as an extra option even for them. It’s about making a display as precise and clear as Apple can make it, and as pro users would want it.

When the iMac Pro was launched in 2017, it was the top of Apple’s range. There were some comments that it was a stopgap, practically a placebo for power users while Apple worked on the Mac Pro. But it was a pretty costly and very powerful stop gap if it were.

Certainly Apple positioned it as the high end Mac until 2019 when that Mac Pro was released. It’s not as if it really downgraded the iMac Pro, either, it just talked up the Mac Pro more.

Unfortunately, it’s also not as if Apple did that much to the iMac Pro in the last few years. The iMac Pro you can buy today is the same as one you could have bought three years ago.

This week’s update brought no improvements to the specifications, no change whatsoever to the power, performance or capability of what was available in 2017. The sole change is that in 2017, you’d have had to spend around $800 over the base price to get this configuration.

Now the 10-core model is the base configuration, and it sells for the same $4,999 that its previous entry version did. Today, the new 27-inch iMac without the nano-texture display sells from $1,799, and on the surface that is a giant difference.

A $3,200 gap between iMac and iMac Pro would rather suggest that the machines each remain aimed separately at the high-end consumer and low-end pro user as before. That division far less clear, though, when you look at what each model offers — and in the case of the regular 27-inch iMac, what it can offer. 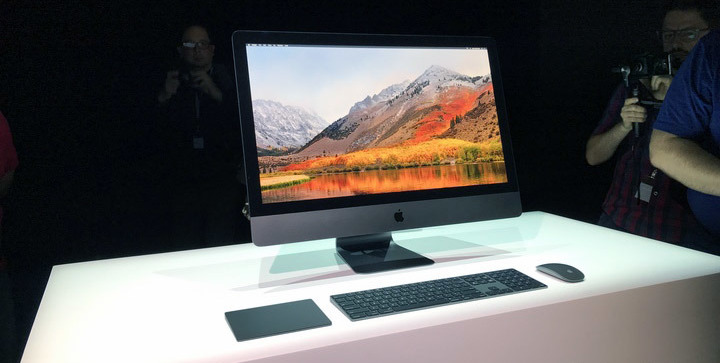 The first sneak peek of the iMac Pro in 2017. It hasn’t changed much.

The new iMac can be configured to a 3.6GHz 10th-generation Intel Core i9 processor, with the same 1TB SSD, and 32GB RAM for $3,499. The RAM isn’t quite the same, though the difference will not be very apparent as the iMac Pro has 2666Mhz ECC RAM while the iMac has 2666Mhz DDR4.

The RAM speeds in both models are effectively the same. There are minor differences in timing, but for the most part, that’s not really relevant or noticeable.

Nearly everybody reading this has no need for ECC RAM. Some do, though, and for those, that’s indispensable. Fortunately, the Mac Pro uses ECC RAM too.

RAM aside, the key question is really going to be over how that processor compares to the iMac Pro’s one in real-world use, and especially under continuous heavy load. It’s not known yet whether the new iMac has adopted the cooling system of the iMac Pro and that becomes more and more important for high-end pro use.

Still, $3,499 is a lot less than you’d pay for the iMac Pro, and if you spend $500 on the nano-texture display you’re still a thousand dollars ahead. For that you could up the iMac’s GPU to a Radeon Pro 5700 XT with 16GB RAM and quadruple the SSD storage to 4TB.

We’ll be talking about these two models head-to-head a bit later.

It’s not a question of money, it’s a question of what that money gets you, and right now the iMac and the iMac Pro are today more comparable than they have ever been. The 2020 iMac stands up very well against the 2017 iMac Pro and if you’re buying now, those years are significant.

While the iMac still uses the same basic design as it has since 2012, Apple has continually updated it. Alongside this new nano-texture display option, the latest revision has brought True Tone, a 1080p FaceTime camera, and a three-microphone system.

That’s still not the redesign that has been continually rumored for some years, but each contributes to making the iMac a more pro option. And while we might want a design, while we might now want an Apple Silicon iMac, there’s really only been a single practical reason to hesitate over buying the iMac.

It was the absence of the T2 security chip — and the new version includes it. The difference that chip makes to video and audio processing is huge. 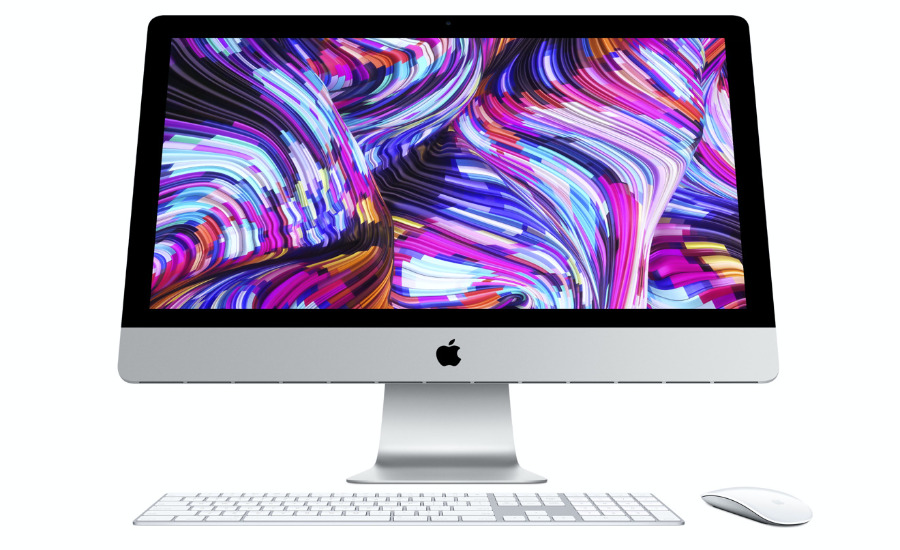 The newest 27-inch iMac has gained the T2 chip

T2 is a little divisive, because its presences has caused inconveniences and problems. The inconvenience is that because of its security features, booting from an external drive is now something that needs to be prepared in advance. You can’t just connect a drive and boot from it if something has gone wrong with your Mac.

There have also been problems for pro audio users. They’ve experienced audio dropouts and pops, with a range of USB and Thunderbolt devices.

Overall, however, the T2 has been a boon. Apple introduced T2 in the iMac Pro and until now has remained one of the most important differences between that and the iMac. It had seemed peculiar how Apple had left it out of the iMac before, especially when the company included it in the 2018 Mac mini.

A Mac mini will never come close to the performance of an iMac Pro. A top-end iMac now can, but only when you compare it to the low-end iMac Pro. And if you need more power, there is an awful lot you can add to the iMac Pro.

The iMac Pro can be configured to have a 2.3GHz 18-core Intel Xeon W, plus 256GB of EEC DDR4 RAM, and a Radeon Pro Vega 64X with 16GB HBM2 RAM. It can have 4TB SSD storage, though this is actually one area where the iMac beats it — the iMac can be bought with 8TB.

Maxing out the iMac Pro like this would cost $13,499, so it’s not a casual purchase, but it can be done. And the iMac Pro can be configured to be much more powerful than the iMac.

Only, once you start doing this, you begin to nudge into Mac Pro territory. It’s not possible to directly compare the machines as, for instance, they come with different options for RAM and processor. 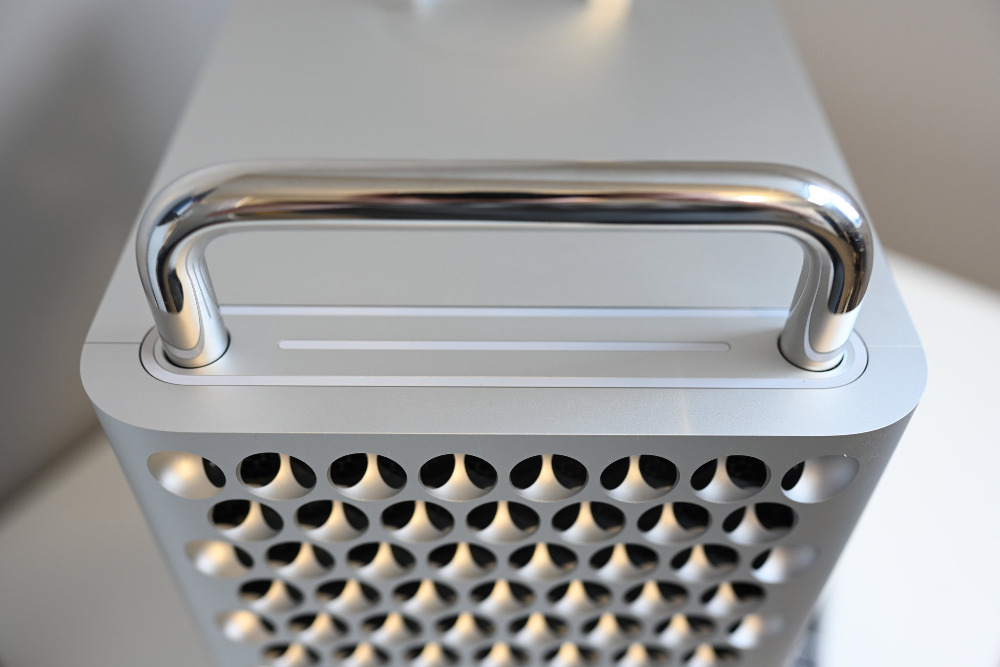 If you want power, you’ve now got the Mac Pro

So the top end iMac Pro still provides more than the iMac can. But the Mac Pro certainly has more options and all of them are more powerful than the iMac Pro.

Consequently, while there is a sizeable gap between the iMac and the Mac Pro, it looks increasingly as if the growing iMac performance and the greater capability of the Mac Pro mean there’s little need for a machine in the middle.

Pros don’t need “pro” labeling to get the job done

Years and years after Apple first called a product “Pro,” there remains a lot of debate about “Pro” and what it means as a whole. AppleInsider has a lot of self-described “Pro” users, and we aren’t going to contest that because we have a pretty good handle on who most of you are based on what you’ve explicitly told us.

But, what we are going to contest is that there is one, true definition of “Pro” beyond “makes money with Apple hardware.” All Apple has ever meant with the “Pro” name is that whatever gets the label isn’t on the lower end of the product line.

Apple’s iMac strategy for the future

When the iMac Pro came out in 2017, it slotted in very nicely high above the capabilities of the iMac, and was the most powerful Mac ever made. In 2020, it’s lost the top spot to the Mac Pro — and the 10-core Intel Core i9 means it has little or no advantage over a top-range iMac.

That 2012 form factor, that chassis design, especially with a great 5K display built in, is still very appealing to all users, not just pro ones. But if pro users can get a better display and strong enough performance from the regular 27-inch iMac, it starts to become hard to see a long-term future for the iMac Pro.