New images shared on Weibo appear to show a circular array of magnets housed inside an “iPhone 12” chassis. The unverified images depict 36 individual magnets in a circular arrangement, suggesting they could be related to mounting or charging.

EverythingApplePro, who shared the Weibo-originating images on Twitter, also posted an image of an
alleged iPhone 12 case with a similar array of magnets built in, which he suggests are “likely for perfect alignment with Apple’s wireless chargers.”

Apple hasn’t released any native wireless chargers for iPhone. The company canceled its much-anticipated AirPower charging mat last year due to quality concerns. Rumors persist that it continues to work on an AirPower-like charging mat, although faked images have been shared in support of this. 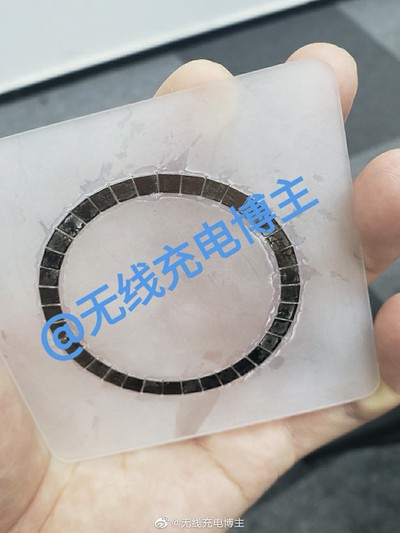 Back in January, analyst
Ming-Chi Kuo said he expected Apple to release a
small wireless charging mat in the first half of the year, but no such product materialized in that timeframe.

For months ahead of their unveiling, last year’s iPhone 11 series was rumored to feature a Qi-based device-to-device charging feature, allowing for an Apple Watch, AirPods, and other accessories to charge on the back of the iPhones. The feature was expected to be similar to Wireless PowerShare on Samsung’s Galaxy S10.

According to one leaker, the ‌iPhone 11‌ series
includes the necessary hardware for a two-way charging feature that was widely rumored for the devices, but Apple disabled the feature on the software end. According to Kuo, the
feature was abandoned because the charging efficiency did not meet Apple’s requirements.

We’re expecting Apple to launch four iPhones in three display sizes this year, and a recent rumor has suggested Apple could
release the devices in two stages.