An updated MacBook Air could be coming in the not too distant future, according to certifications for a new ‌MacBook Air‌ battery recently filed in China and Denmark.

A 49.9Wh battery with a capacity of 4380mAh was spotted by a MySmartPrice contributor in certification filings with UL Demko and the China Certification Corporation, regulatory bodies that must approve and test new hardware used by Apple and other companies. 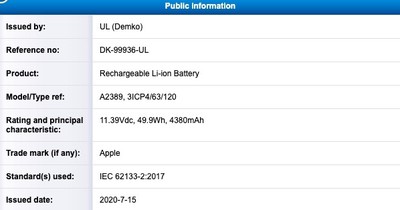 There’s no word on when a new ‌MacBook Air‌ might launch, and these kinds of filings can sometimes happen months ahead of when a new product comes out. Multiple rumors have suggested that the ‌MacBook Air‌ will be
one of the first Macs to get an
Apple Silicon chip, and the new Arm-based machine could come before the end of 2020.

Apple analyst Ming-Chi Kuo believes a refreshed MacBook Air with an ‌Apple Silicon‌ chip could come in the fourth quarter of 2020 or the first quarter of 2021, while DigiTimes has said that a new Arm-based ‌MacBook Air‌ will be released in 2020.

Apple has confirmed that the first ‌Apple Silicon‌ Macs are expected before the end of the year, but has not provided details on which machines will be upgraded first. Apple already upgraded the ‌MacBook Air‌ in 2020 with 10th-generation Intel processors and a scissor switch keyboard, but it’s not out of the question that a second update could come in 2020 given the swap to ‌Apple Silicon‌ chips.

The 49.9Wh battery in the current ‌MacBook Air‌ provides up to 11 hours of battery life when browsing the web and up to 12 hours when using the Apple TV app for watching movies.

If the next ‌MacBook Air‌ set to receive this new 49.9Wh battery is an ‌Apple Silicon‌ Mac, there could be some potential gains in battery life even if the battery size isn’t increasing.

‌Apple Silicon‌ chips are expected to be much more power efficient than the current Intel chips used in the ‌MacBook Air‌ lineup, so in addition to performance improvements, battery life could be bumped up as well.

For more on what we’re expecting for the next ‌MacBook Air‌, check out our MacBook Air roundup, and for details on Apple’s transition to ‌Apple Silicon‌ chips, read our in-depth guide.