Days ahead of Apple CEO Tim Cook’s appearance at an antitrust hearing alongside other tech company leaders on July 29, NYU Stern professor of marketing Scott Galloway has offered ideas for questions the House Antitrust Subcommittee could ask, to determine how much power Apple has.

Cook, along with Alphabet and Google CEO Sundar Pichai, Facebook CEO Mark Zuckerberg, and Amazon CEO Jeff Bezos, will be speaking to the House Antitrust Subcommittee on Wednesday, to try and ease concerns the companies have too much power over their respective markets.

For Apple, the discussions are largely expected to cover its App Store business, as well as the practice of “Sherlocking” third-party apps, along with the management of parental control apps and other pertinent topics.

In a blog post published on Friday, Professor Scott Galloway makes suggestions about how proceedings will go for each of the big four tech giants, as well as pointed questions that each company could potentially face from lawmakers in attendance.

Galloway, a professor of marketing at the New York University Stern School of Business who has a background in economics, has a history of writing and speaking about major brands and how they communicate with customers. As part of his research, he has analyzed the four companies at length, including their economic models, strengths and strategies, and their impact on society.

In terms of how the meeting will fare, Galloway believes the remote nature of the meeting will make it harder for the committee to “go deep on any one issue,” and reduces the chance of an “unscripted moment that reveals something the American public didn’t previously know.”

Most of the heat from the committee will be aimed at Zuckerberg, while Bezos will have a much easier time from lawmakers. Cook and Pichai will attempt to “stay out of the line of fire and fawning for Zuck and Bezos, respectively,” according to the professor.

For the kind of questions that could be asked, Galloway suggests the group could be pressured on their earnings and growth, such as questioning whether they would “be concerned that too many of the spoils are being registered by increasingly fewer firms and people?” Referencing how the market cap per employee is thousands of times higher than other companies in respective sectors, such as Apple’s $11,749,562 figure per employee, they could be asked “Do you think your companies contribute to income inequality?”

On the timely subject of COVID-19, it is pointed out that major tech companies and firms deemed “too big to fail” have avoided losing substantial levels of value, with the four firms instead benefiting from an increase in value and a transfer in power from most other companies to the group in some way. Galloway proposes asking “Should we be concerned that your considerable advantage pre-Covid is now unassailable?”

The matter of competition is brought up by the claim small business formations is at a multi-decade low, with investors seemingly avoiding providing much funding in the fastest-growing sectors. With this in mind, Galloway asks “Why should someone invest in a search engine right now, or a music streaming business, or a social media platform, or an e-commerce firm, given the sizes of your companies?” 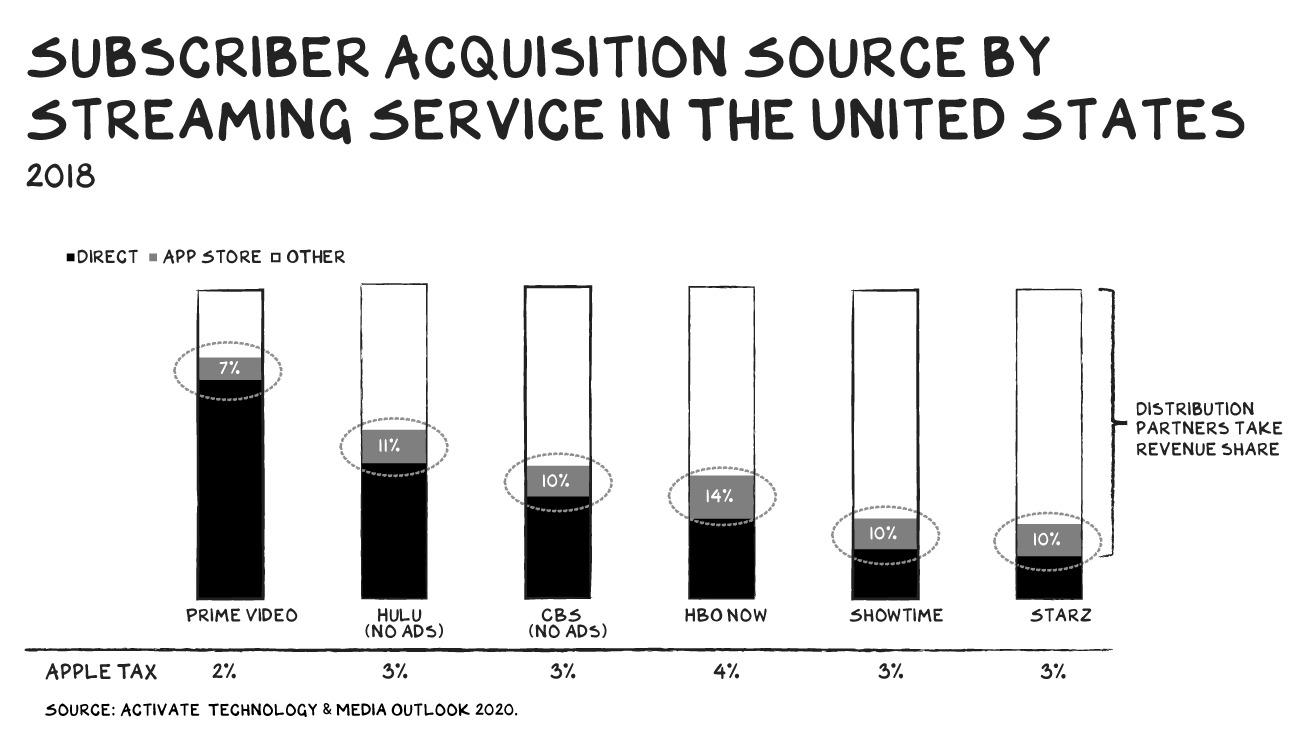 For Apple-specific questions aimed at Cook, Galloway concentrates on the App Store and the Apple TV and Apple Music streaming services.

Referencing the concept of “monopoly rent,” where a monopolistic firm can sell products at a higher price than in a more competitive market, Galloway fixates on the fee Apple applies to App Store purchases, in-app purchases, and subscriptions. Referencing the between 7% and 14% of overall subscribers of video streaming services derived from the App Store, the suggested question to Cook is “Do you think any of these firms believe that paying you this rent is a choice?”

On the subject of the Apple TV+ subscription, Galloway believes Apple has consumers paying $0.80 per billion dollars of content it invests in, a figure similar to Netflix’s $0.90 but far away from HBO’s $7.50 equivalent. It is reckoned that Apple’s offer of a year of free access to buyers of its hardware enables such a low relative cost to the consumer for the content itself.

Suggesting the deal lets Apple offer a media product at below its cost of production, Galloway suggests “Isn’t Apple guilty of ‘dumping,’ that is, buying market share with unfeasibly low prices?”

The professor’s focus on Apple Music is centered around its ongoing spat with Spotify, which has made antitrust complaints about Apple before relating to its fee. After claiming Spotify is “consistently rated as a superior music service” and pointing out Apple’s faster growth rate in the United States, Galloway proposes asking Cook “isn’t this a function of you owning the rail, and being able to levy a 30% tax on a competitor while illegally reducing their discoverability in the App Store?”

While the questions asked by Galloway may not necessarily be asked by the committee in such a direct fashion, it is highly probable that the subjects will be brought up during the event. Lawmakers on the committee will then work on a report that could propose new antitrust regulations that could impact the tech giants and their respective products and services, in a bid to even out the playing field.