The new Apple Sanlitun opened today in Beijing, bringing Apple’s greatest retail design ideas to its original home in China. Customers took the rare opportunity to celebrate the massive new store in a year where even small victories can feel few and far between.

For a few hours on Wednesday night, the entire arc of Apple’s retail history in China could be summarized in one frame. The original Apple Sanlitun, stainless steel and cantilevered over a walkway, stood glowing side by side an all-new flagship store, its stone and glass walls rising out of the adjacent plaza. As workers removed the wrappings from the new space, the old building glowed its last since becoming Apple’s first store in China almost exactly 12 years ago.

With a multistory pavilion layout, public tree-lined plaza, and a massive Forum for creativity, Apple Sanlitun’s new design places it among the greats. Its transparent facade of 33-foot glass panels topped by a canopied solar roof carries a visual lightness while packing symbolic weight. The store has already become the focal point of Taikoo Li Sanlitun mall and an instant classic among Apple fans. 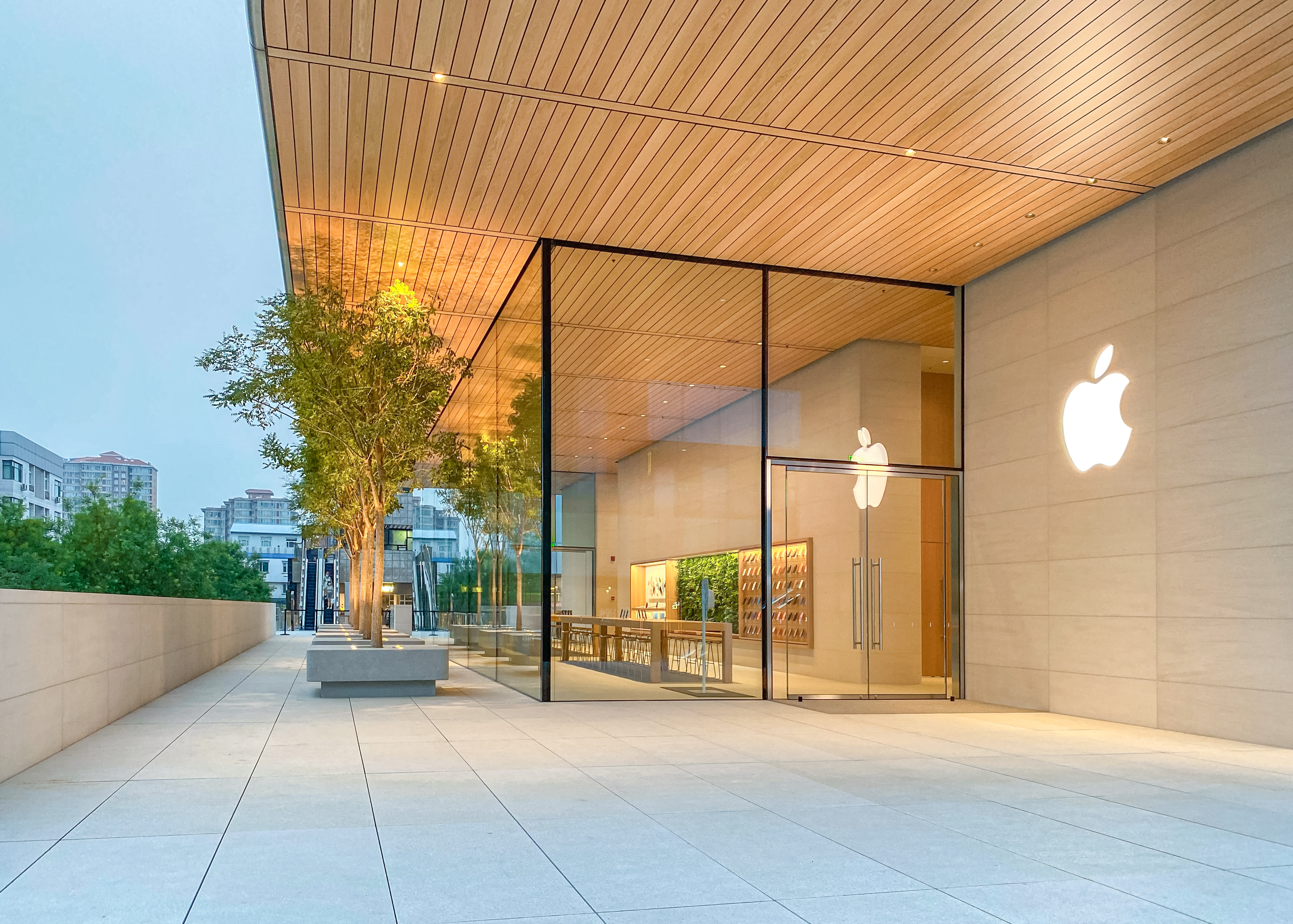 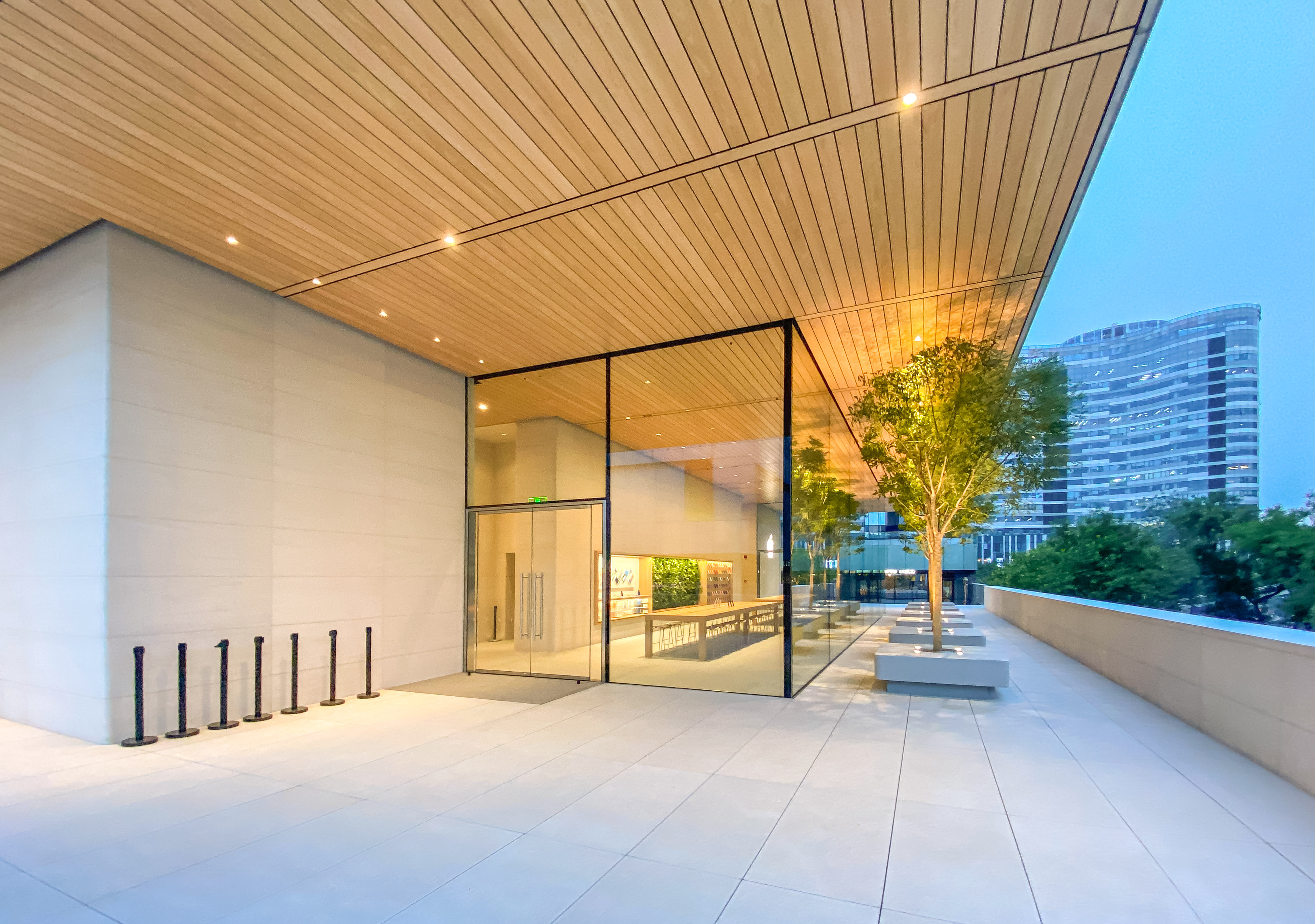 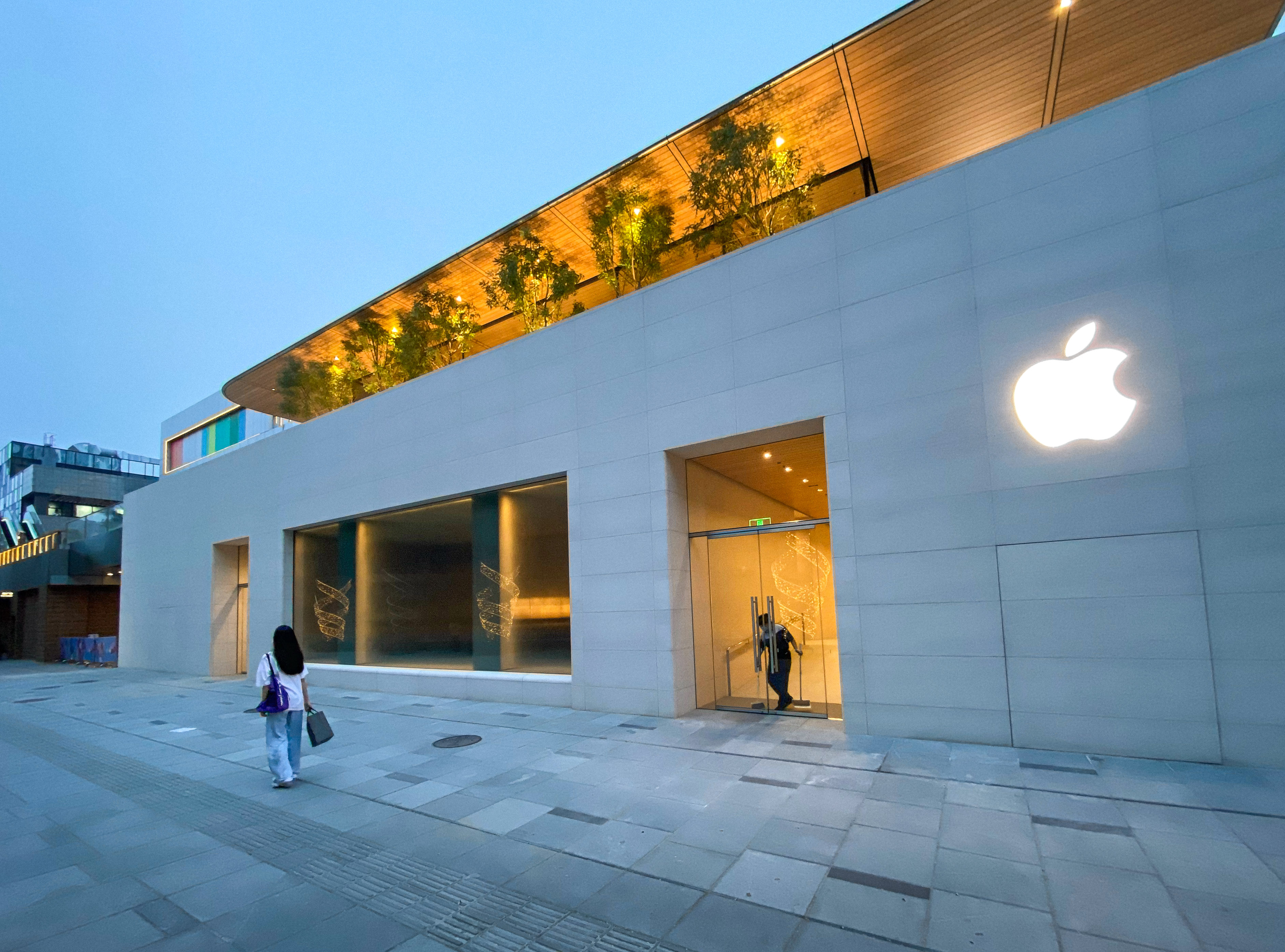 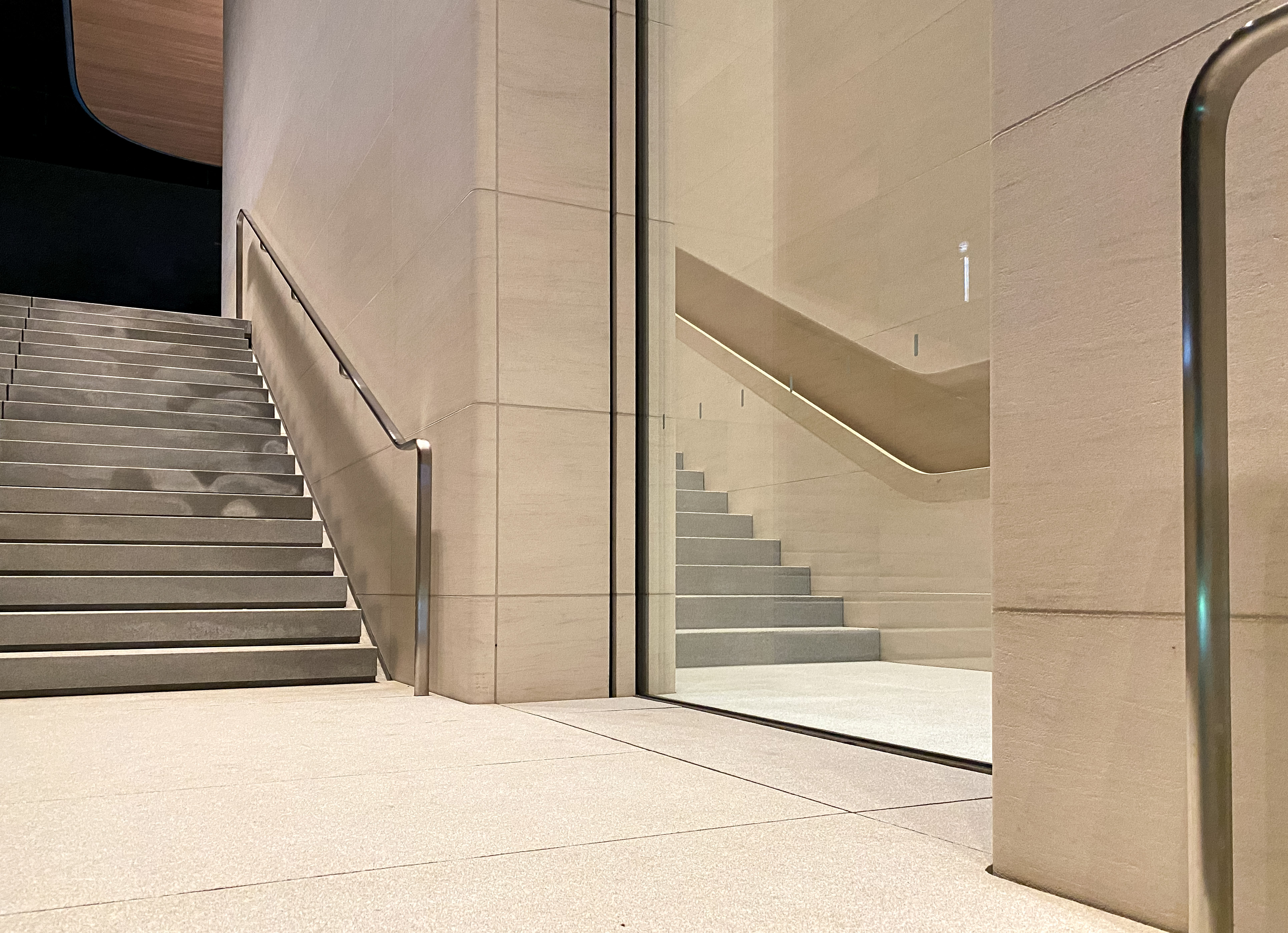 Two floors of store area, an outdoor space, and 185 team members await visitors. Stone stairs, an escalator, and a pedestrian bridge make the building accessible from just about anywhere in the mall. Alongside the south stairs, a stepped garden filled with Sophora japonica trees and exotic plants extends the length of the store. At the rear entrance, a stone patio dotted by benches and trees is an outdoor extension of the store’s Genius Support area. 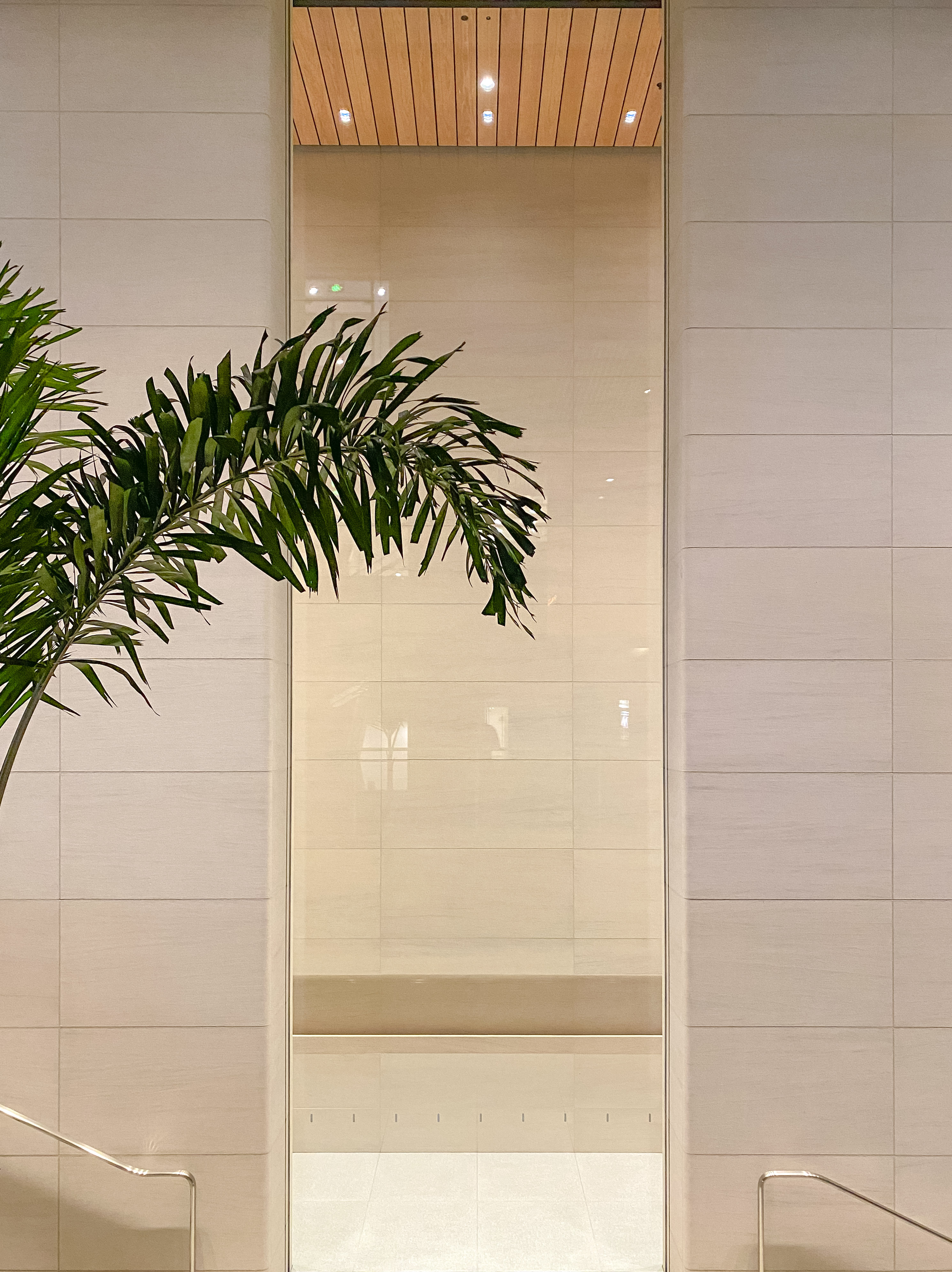 Inside, the first floor of Apple Sanlitun is divided in two. The front of the store is dedicated to 15 product tables and Avenues along the walls. The rear of the store houses the private Boardroom for business customers and special guests, designed with a unique frosted window for privacy.

Floor two brings a quieter space for service, and someday again, Today at Apple creative sessions. The massive video wall faces out into the mall plaza, visible from the ground to draw visitors inside and upstairs to the Forum. Apple Sanlitun’s design is comparable to Chicago’s Apple Michigan Avenue in many ways, and the parallels continue here, too. The second floor ends in a panoramic balcony overlooking Beijing. The balcony’s steps function as gallery seating for customers with Genius appointments. 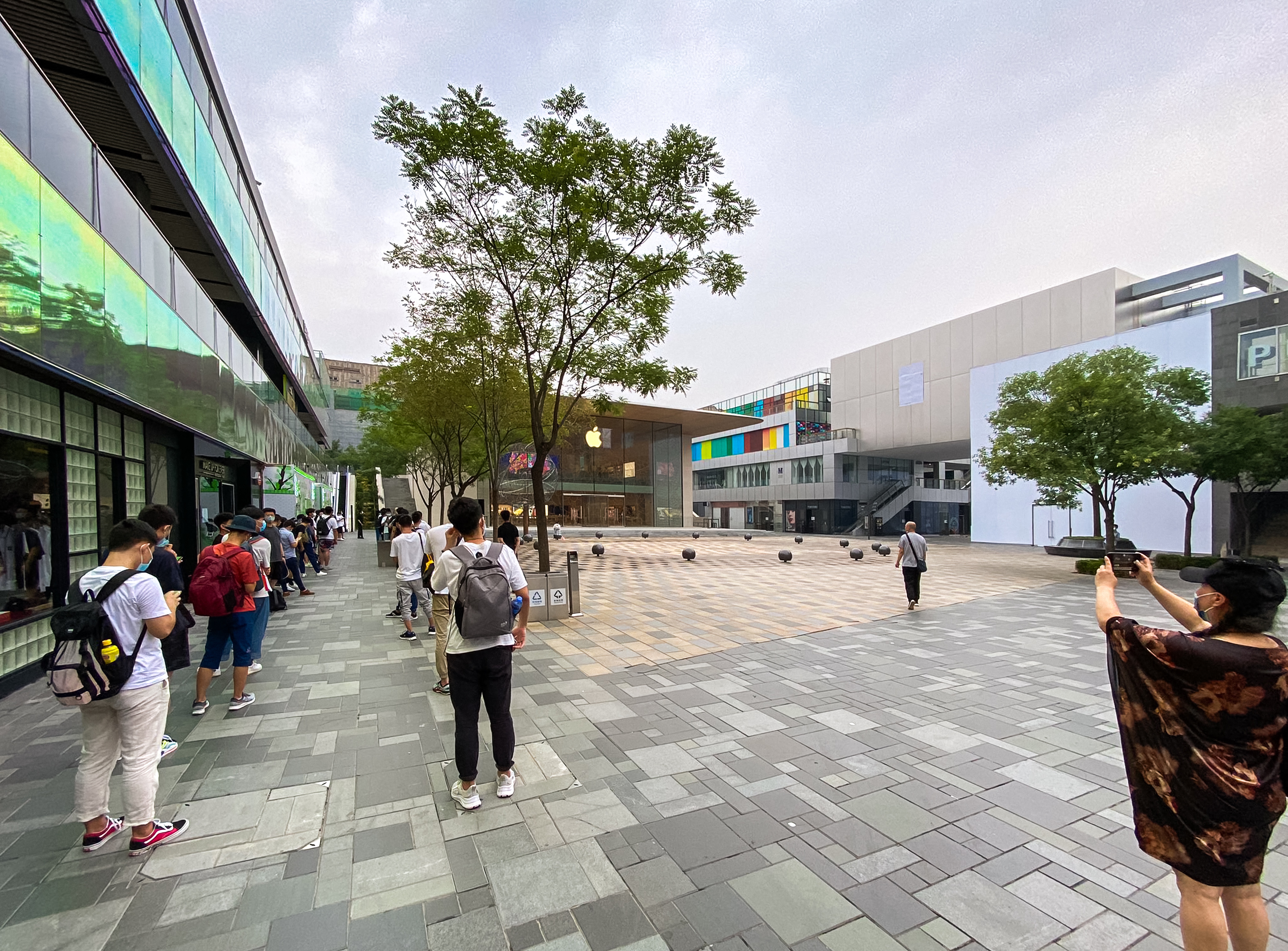 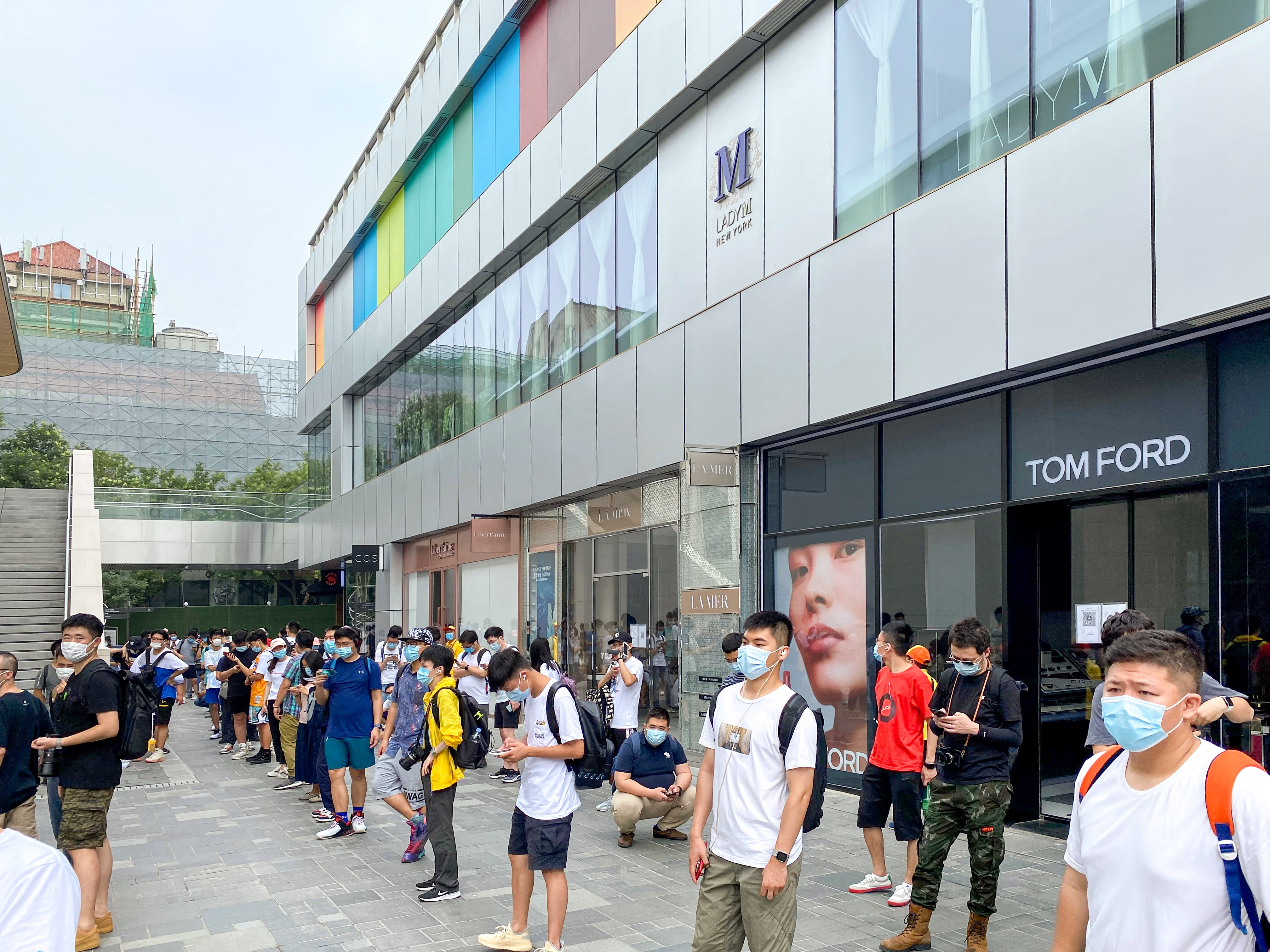 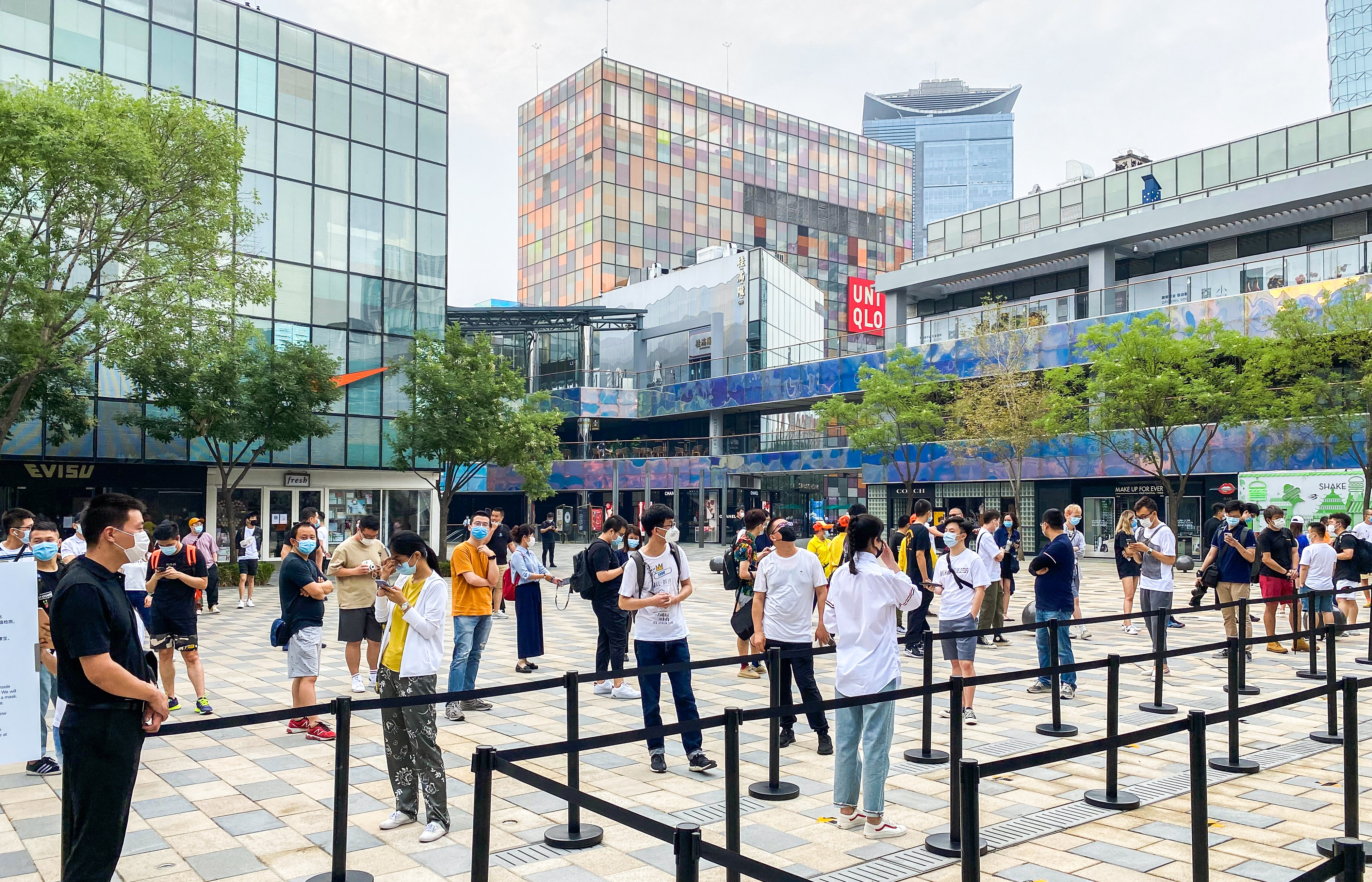 Opening a massive new retail store in the era of COVID-19 is no easy feat. Even in Beijing, which has controlled its outbreak far more successfully than the US, some Apple fans wondered if the store they had waited so long for would open as planned. Despite the highly unusual circumstances, no details were left to chance. 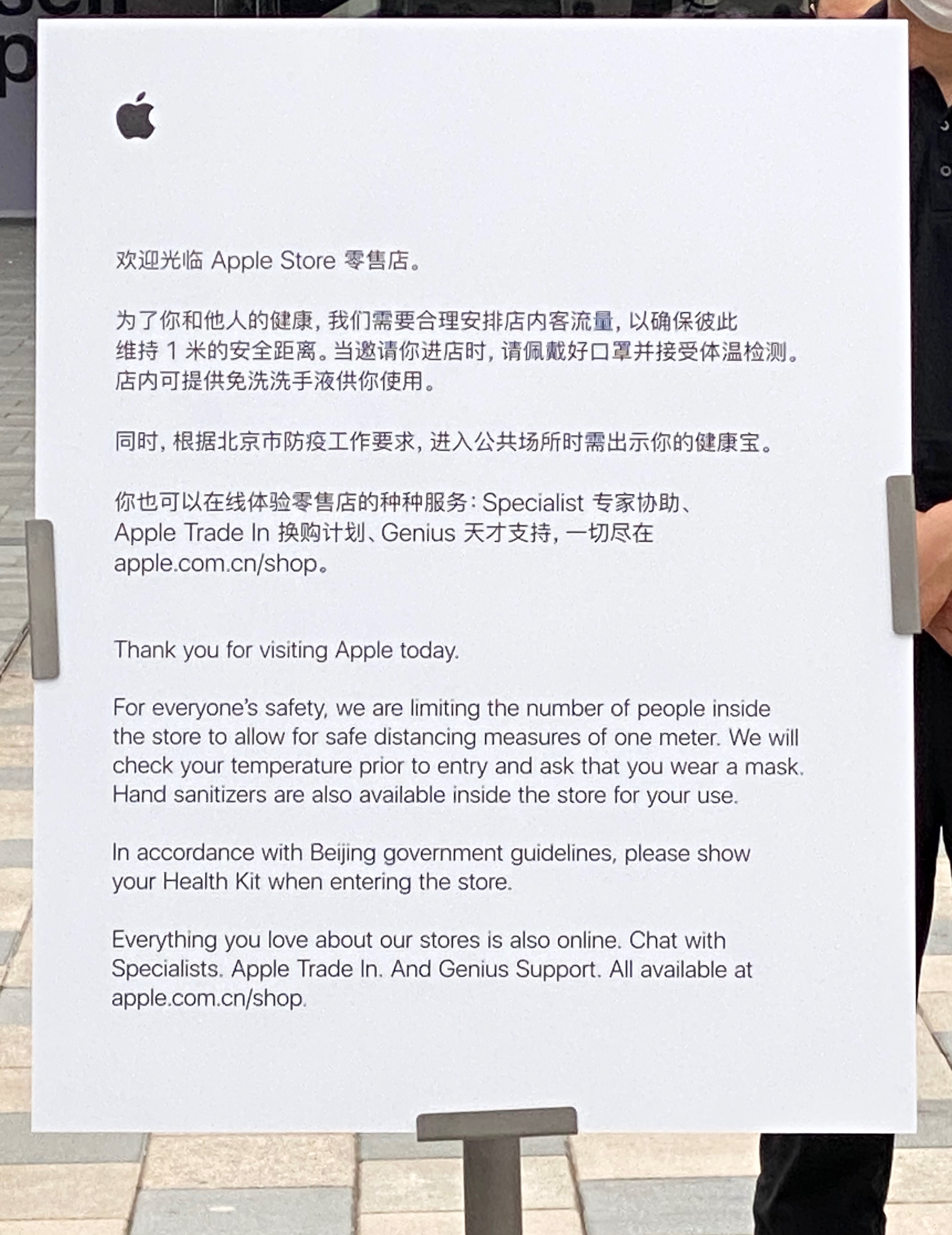 Apple celebrated Sanlitun’s arrival with elaborate layered artwork covering the windows and a matching online preview. A stunning WeChat article detailed the store’s design. When the window decorations were removed, a gold outline of the intricate floral pattern was left on the glass, creating an effect similar to a leaded window. The outline will naturally fade away over time.

An easel placed at the front entrance to the store noting the opening is also entirely custom artwork designed with a rich texture and raised Chinese lettering. 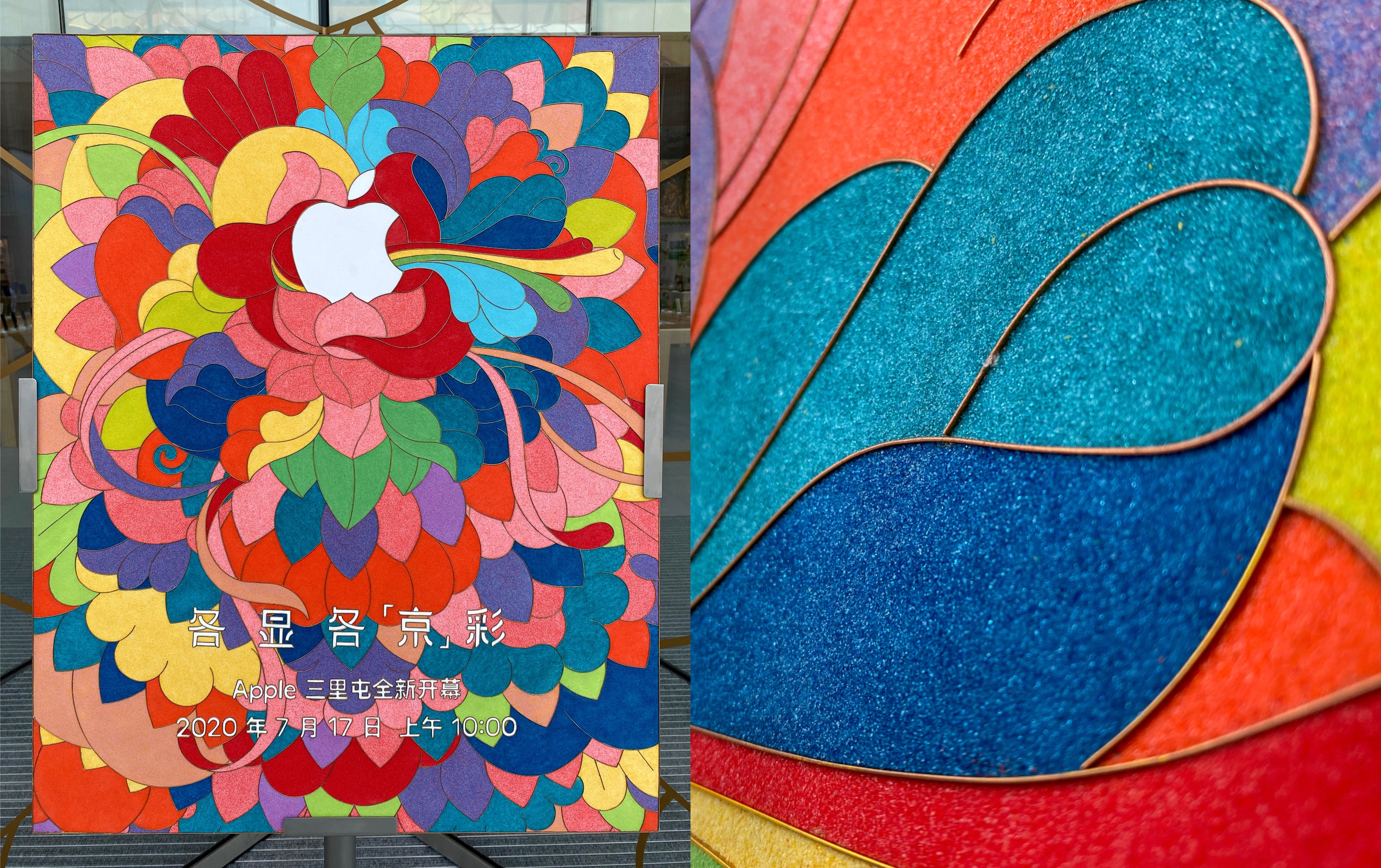 With masks and hand sanitizer, Apple fans in Beijing lined up to see the store when it opened on Friday just before 10 AM. Despite the opening date remaining a secret until just days before launch, a packed crowd filled the entire Taikoo Li Sanlitun plaza.

Apple has 42 stores in Mainland China and 5 in Beijing, but new openings these days are rare. Sanlitun is Apple’s first new store built in China since Apple Suzhou in September 2018. It’s the only Apple Store in the country to ever move to an entirely new structure. Three of five locations in Beijing now offer the latest Apple Store design.

If you attend a store opening, we’d love to see and share your photos. Follow along on Twitter for daily Apple Store news, and check out 9to5Mac’s Weibo page for another way to stay connected. 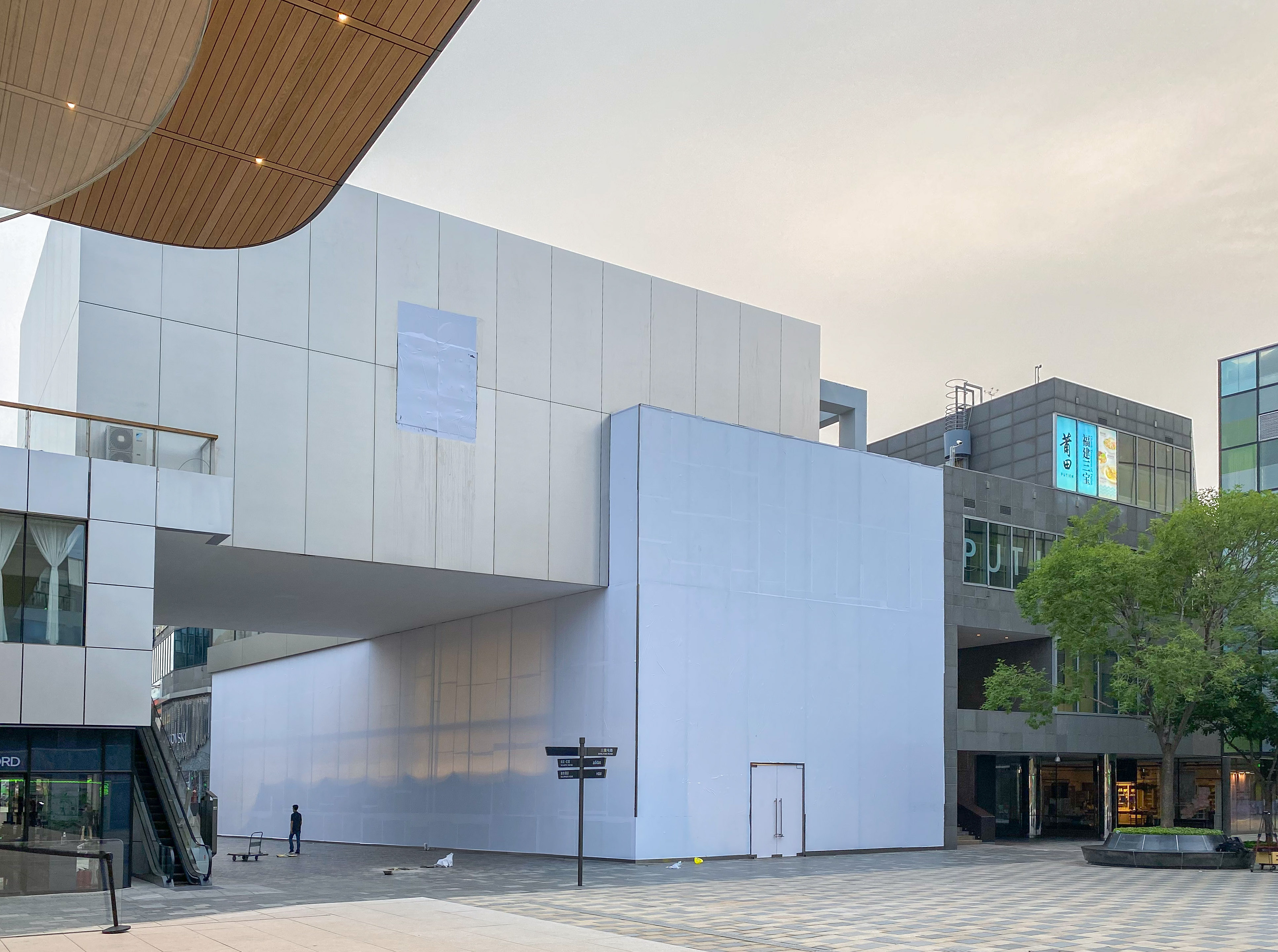