Google Cloud Platform is the first major cloud provider to offer two different network service tiers. Standard tier is like any other provider, but the Premium tier uses Google’s own network, which comes with numerous benefits.

In short—Google, being the megacompany that they are, have built a massive network of real-world infrastructure, enough that most of the distance from the end user to the datacenter your resources are in can be covered using Google-controlled networking devices. This lowers the number of traceroute hops, and leads to faster transport.

The premium network tier is the default for new project and new networking resources, ensuring the best performance possible.

Compare this to the regular internet, which is what most other cloud providers are largely using. Traffic exits as close to the user as possible, but still needs to hop around the open internet before reaching the end user.

While speed is very important, and reason enough to choose premium over standard, it is not the only benefit here. One of these features is Global Load Balancing. Instead of having a load balancer that acts as the gateway for many servers in the same region, you can have one massive load balancer that can split traffic among servers in different regions. This gives you the benefit of a single anycast IP address for your whole network, a feature that simply isn’t possible without total control over the underlying routing hardware.

The other primary feature of Google’s Premium tier is their Cloud CDN, which also makes use of a single anycast IP to serve a global network. Thanks to the premium network tier, Cloud CDN is one of the fastest CDNs around and paired with a global load balancer makes for a very resilient network.

Ultimately, the choice for your network depends on pricing. Data costs can be a significant part of cloud provider bills, and the standard tier is around 20% cheaper than the premium tier. If maximum network performance isn’t an issue, the standard tier will be suitable for many people (after all, it’s what most other cloud providers are using). However, if you want to make use of Cloud CDN or Global Load Balancing, or just want the fastest website ever, stick to premium.

Ingress data is always free. You’re only charged for data served out to users, which will be the majority of it anyway. You can view the most up-to-date pricing data here.

For the premium tier, pricing depends on where the data is coming and going from. Usually, data will stay in-region, because a user will always be routed to the closest server. If you have to send data overseas, it’s going to cost more at $0.12 to $0.08 per GB.

For the standard tier, it’s simpler. Pricing simply depends on where the user is. However, the prices are around 20% cheaper across the board, compared to premium.

You can configure your project wide setting here, but most resources will give you the option to override. For example on static external IP addresses, you have the option to switch the resource over to premium tier. 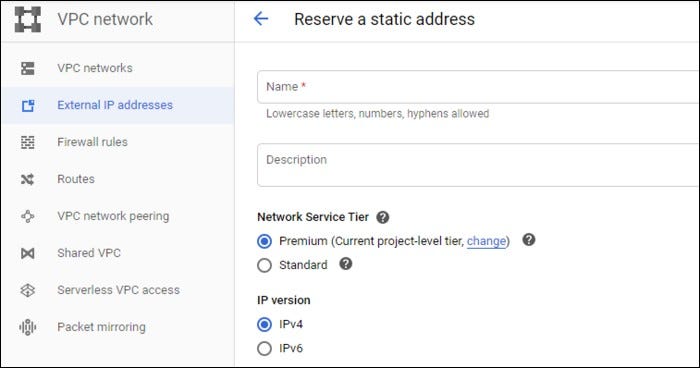