The latest update to image editing app Pixelmator Pro for the Mac introduces new features such as the ability add curved and circular text, plus improvements to its Machine Learning tools.

Pixelmator Pro 1.7 is the latest of the many regular updates to the app, each either improving performance or adding new features. This version brings significant new additions plus particularly welcome refinements of recent tools.

The Machine Learning-based Super Resolution has been updated to increase how well it can successfully scale up images to make them larger without visible artefacts or distortion. In AppleInsider‘s tests, a 640 x 440 pixel graphic would be automatically resized to 1980 by 1320 in the previous Pixelmator Pro 1.6. In the new update, the same original automatically resized to 5940 x 3960.

ML Super Resolution can never be as good as having an original high-res copy, and its effectiveness depends immensely on the image. Yet it was already a useful tool and it now has greater benefits both because of the ability to scale higher, but also because the process has been a little refined.

Instead of choosing an image, selecting ML Super Resolution and simply waiting however long it takes, now Pixelmator Pro 1.7 appears faster, and also shows a progress bar for the first time.

Pixelmator Pro 1.7 also adds a feature that’s perhaps been a surprising omission up to now. From this version, users can type text to follow along any curved or circular path, using three new type tools.

Circular Type, Path Type, and Freeform Type allow for emojis as well as text. The new tools also work with the regular Text tool’s line height and character spacing, to allow for more precise positioning of lettering. In our limited testing, it wasn’t obvious how to extend and edit type paths once they were created, but making new ones was particularly simple. 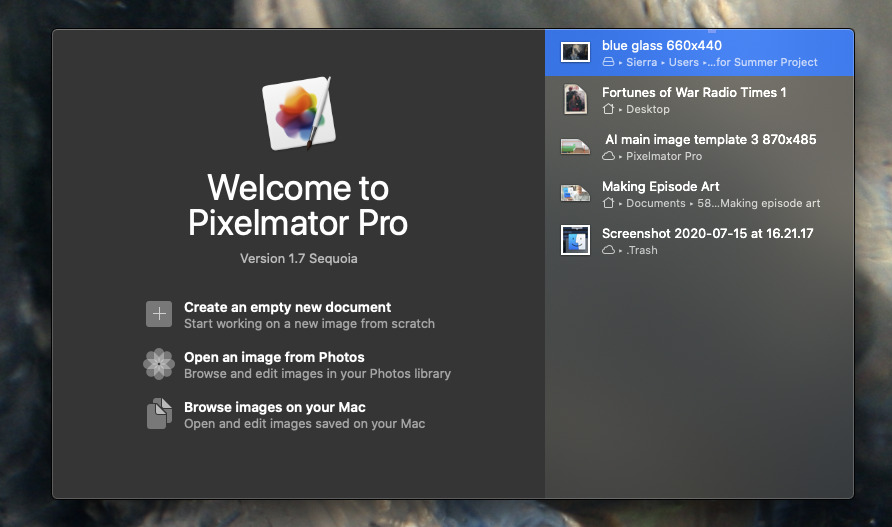 The new Welcome screen offers a list of recent documents

This latest version also adds what the Pixelmator company says is another long-awaited feature, the ability to rotate the canvas. It’s always been possible to rotate an image to any degree, but now its meant to act like a piece of paper which artists can move around to suit them.

Lastly, Pixelmator Pro 1.7 has brought a revamped Welcome screen which more resembles the ones in Affinity apps. The splash screen now lists recent documents and offers options for quickly creating new ones.

Pixelmator Pro 1.7 is a free download from the Mac App Store for existing users, and costs $39.99 for new ones.